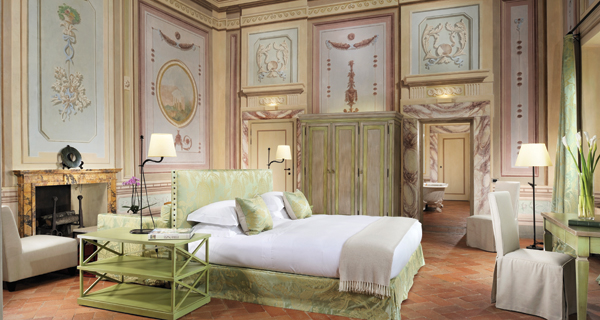 Jennifer Morris’s report from Castello del Nero Hotel & Spa in the Chianti region of Tuscany was so enticing, Rupert Murray plumped for it as his Editor’s Pick

When staying at a seriously nice hotel there’s always a slightly uncomfortable sensation in the back of my head. It’s a nagging voice that tells me in a deeply patronising tone: “You don’t belong.”

I get that every time because of inferiority issues I should address but don’t.

As a result the fear that a staff member will escort me out at any moment then laugh at me accompanies me in Aspire world. The helpful side of this affliction is it creates a good test of the best hotels. The quicker my worries dissipate, the better the hotel.

At Castello del Nero the voices inside my head were gone by the time I’d checked in. A new record. The 90 – predominantly local – people working at the 12th-century castle made me feel like I was their favourite-ever guest. There’s a chance I am their favourite-ever guest. But it’s more likely that they are very good at their jobs, like their jobs, and knew how to treat me to make me chill.

Because the 50-room castle is not short of decadence, opulence and grandeur. It sits in 300 hectares of rolling hills, vineyards and olive groves – which are used to produce wine and olive oil for guests.

The hotel has two restaurants including the Michelin-starred La Torre whose executive chef, Giovanni Luca Di Pirro, holds cooking classes for guests. We made fresh pasta and tiramisu, and ate it for lunch while nodding encouragingly at one another and counting the likes pile in on Instagram.

The closest I’ve come to death by relaxation was at the ESPA spa here where I was pampered in a custom-built treatment room. After selecting purple lighting (this was the first time I’d been asked my opinion on a lighting mood and I enjoyed the power) the most rousing music I’ve ever heard started and I entered a mood that can only be described as battle ready. After calming down a little I chose a full-body massage with local olive oil before padding out to the heated outdoor pool with no worries left – other than a tiny niggle that I might smell of roast potatoes.

A stay in Chianti wouldn’t have been complete without a good go on the red wine. Sommelier Giulio Chini holds tastings for guests with an an array of rich local wines worthy of the surroundings.

The hotel is within 30 minutes’ drive of walled medieval hill town San Gimignano, Florence and Siena, and stands slap bang in the middle of an area which is also known for its non-chocolate truffles.

Truffle hunter (yes, really) Giulio Benuzzi of nearby Ristorante L’Antica Scuderia gave us a lesson in the varieties, leading us on a walk with his truffle-hunting dog Edda. Three truffles were unearthed and we were served a delicious three-course lunch themed around, err, truffles.

Castello del Nero Hotel and Spa opened in 2006, before which the 12th-century building was inhabited by noble Florentine family the Del Neros and then the Torrigianis.

None of the 32 rooms and 18 suites are the same and some even have original frescos, including the Del Nero family’s coat of arms. One of the towers houses a suite, and La Torre restaurant was once a stable.

Original cotto tile flooring stretches throughout a large part of the castle and vaulted ceilings and fireplaces remain in communal areas and bedrooms. The tennis courts, swimming pool and spa were presumably added more recently.

A chapel was added in the late 1700s which remains consecrated but can’t be used for marriages. Other parts of the hotel are popular for weddings though.

Italian gardens at the entrance were created in the 1800s and nobleman Carlo Torrigiani’s American wife Anna Frey was such a fan of the castle that she opted to be buried in the chapel in 1917.

One of the suites is named after Irish flautist Sir James Galway who was the first to stay in it.

Rates from £340 a night for B&B castellodelnero.com