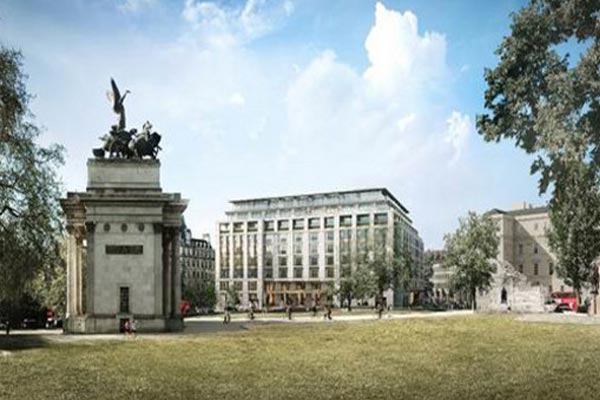 The green light has been given for the creation of a luxury Peninsula hotel in central London.

Joint venture developers Grosvenor Britain and Ireland and Hongkong and Shanghai Hotels plan a 190-room hotel, to be known as The Peninsula London, at Hyde Park Corner.

The partners submitted an application in July to replace existing 1950s and 1960s offices with a hotel and residential apartments designed by UK-based Hopkins Architects.

The scheme is expected to support more than 2,000 jobs and deliver up to £60 million a year to the economy of the capital.

“The Peninsula London is an example of the long-term thinking and high-quality design required to maintain London’s status as a global city.

“The scheme will support thousands of jobs and brings tens of millions of pounds to the West End economy.

“It is a major milestone in our efforts to improve Belgravia as a place to visit, live and work.”

Clement Kwok, managing director and chief executive of Hongkong and Shanghai Hotels, added: “London is one of the world’s most dynamic capital cities and we are excited to move another step closer to introducing The Peninsula brand to London together with our partner, Grosvenor.

“This hotel has been designed to align with our group’s philosophy of developing a small number of the world’s best hotels in exceptional locations, while respecting the history and heritage of the local area.

“We are very optimistic for the long-term future of London as a business and tourism destination. ”