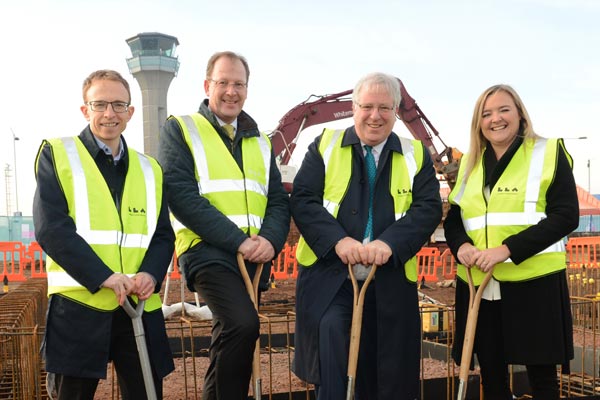 The planned £110 million transformation of Luton airport and the role it will play in meeting the immediate demand for air travel has been praised by transport secretary Patrick McLoughlin.

His comments came as he officially broke ground on the redevelopment of the airport’s passenger terminal.

The redevelopment will increase annual capacity at the airport by 50% from 12 million to 18 million passengers a year by 2020.

Luton-based easyJet said the revamp would enable the airline to continue growth strategy at the airport which will result in more destinations being served.

The budget carrier has increased its aircraft based at the airport from 15 to 19 in the past year, raising passenger numbers by 9% or 400,000.

Luton is now easyJet’s third largest base and it carries more than five million passengers a year on 51 routes.

The redevelopment will cater for the needs of passengers and transform their experience with faster access to aircraft and increased range of amenities among the key benefits.

McLoughlin said: “The transformation of London Luton airport is adding to the UK’s reputation for world class aviation infrastructure.

“Not only will its development help to meet demand for aviation but will also create thousands of jobs.”

EasyJet UK market director, Sophie Dekkers, said: “As the number one airline at the airport, the redevelopment was a key factor in our commitment to double our passenger numbers at London Luton airport over the next 10 years.

“We have already started this expansion having introduced 10 new routes in the past year and added four more aircraft based at the airport this year.

“We are really pleased to be supporting the airport through the project – the results of which will ultimately provide much needed improvements to the airport and enable passenger numbers to increase which will in turn drive economic growth and jobs for Luton and the surrounding region.”

Airport chief executive, Nick Barton, said: “Expansion at LLA is strategically vital to ensure that we can meet rapidly rising demand for air travel in the South East over the next 15-20 years.

“Our £110 million transformation is also set to give a huge boost to the local economy and will create thousands of new jobs for local people.

“Passengers will benefit from a more efficient, friendly and convenient airport.

“We’re working hard to improve their experience further by seeking to introduce a dedicated new express rail service with four fast trains per hour and a fixed link to the terminal from Parkway train station.”