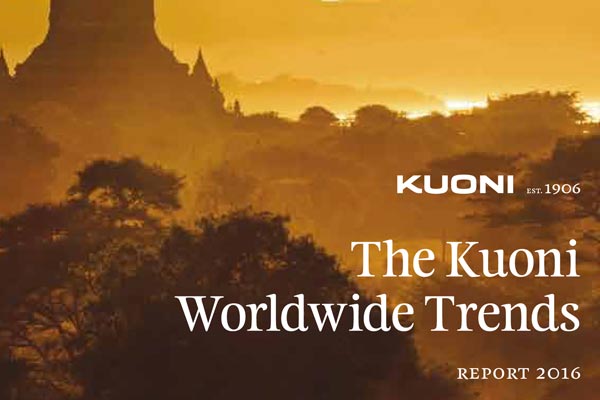 The luxury operator says people’s determination to tick off their holiday wish list of is seeing holidaymakers prepared to invest more in their trips.

The firm says it has seen holidays with an adventure, cultural or touring element as part of the itinerary grow at twice the pace of stay-put beach breaks over the past two years.

Traditional favourites Maldives, Thailand and Sri Lanka have retained their tops spots in the annual report but Myanmar, Kenya and Namibia have seen the biggest rises in bookings.

The Maldives remains a firm favourite with honeymooners who are now spending an average of £5,951 in total on their trip, up from £5,743 last year. Same-sex honeymoons are also on the rise.

Vietnam is also a rapid riser. Unlisted in the top 20 five years ago, advance bookings for 2016 show Vietnam at 12th position – its highest position in the best-selling list.

The United Arab Emirates has slipped from eight to 15th position while Switzerland has dropped out of the top 20 altogether.

The tour operator blamed the “slight dip” in UAE bookings, which includes Dubai and Abu Dhabi, due to increasing instability in the Middle East.

And it said high costs in Switzerland following a currency crisis had led to a 25% decrease in bookings.

Other success stories include South Africa, the Seychelles and Tanzania, which all appear in this year’s list after failing to make it last year. The US, Antigua, Saint Lucia are also all up.

Derek Jones, Kuoni’s managing director, said: “Travel has become so integral to people’s lifestyle – there is a desire to see and experience the world like never before.

“New direct flights from the UK to places such as Vietnam, Peru and Costa Rica this year means parts of the world are opening up for mainstream tourism, which is changing the landscape of travel.

“Beyond the mass-market beach trips, which tend to be much more price-sensitive, we are definitely seeing a thirst for exploration amongst British holidaymakers prepared to invest in making their wish lists a reality and travel with companies which have a network to support them should anything go wrong.”

The Kuoni report states: “Despite 2015 being defined by headlines from the Tunisia attacks to the economic meltdown in Greece, Kuoni’s report reveals demand for worldwide travel shows no signs of slowing.

“Whilst confidence in travel for wish list destinations and experiences is unabated, booking patterns for 2016 do reflect a hesitancy to book some destinations, with Egypt dropping out of the top 30, Morocco and Turkey down and even the ever-resilient Dubai and Abu Dhabi experiencing a slight dent in bookings year-on-year.

“Yet with the pound riding high against most currencies at the moment, travellers from the UK are enjoying some of the best value holidays to many long and short-haul spots. “