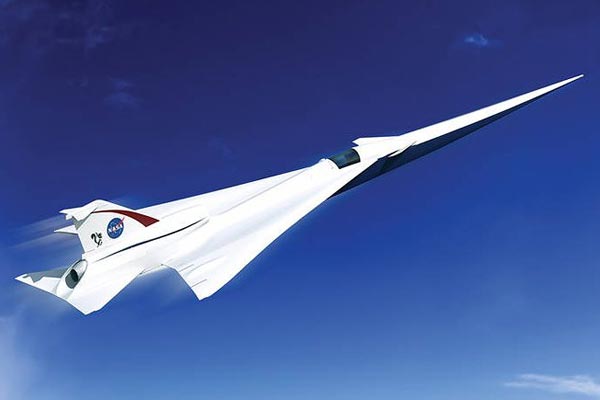 NASA has provided $20 million to aeronautics firm Lockheed Martin to develop plans for the first supersonic commercial airliner since the retirement of Concorde.

The experimental aircraft is one of a series called “X-planes” that Nasa plans to develop.

The research is concentrated on ensuring that the new aircraft’s supersonic boom – the noise generated when an aircraft crosses the sound barrier – is less intense than on previous high-speed aircraft.

The intensity of Concorde’s sonic boom led to its being banned from flying faster than sound over the US, which substantially limited its potential destinations.

He linked QueSST with the agency’s legacy of high-speed research, starting with the rocket-powered Bell X-1 that first broke the sound barrier in 1947.

“Now we’re continuing that supersonic X-plane legacy with this preliminary design award for a quieter supersonic jet with an aim toward passenger flight,” Bolden said.

Rob Weiss, general manager of Lockheed’s Skunk Works – which works on experimental projects – said the company had been working with Nasa for more than a decade on the technology needed for a new generation of commercial supersonic aircraft.

British Airways and Air France retired Concorde in 2003 after nearly 30 years because of prohibitive operating costs.

The aircraft flew at a maximum of twice the speed of sound, making a London to New York journey in about three and a half hours.

A 10-year ‘new aviation horizons’ initiative by Nasa has the ambitious goals of reducing fuel use, emissions and noise through innovations in aircraft design that departs from the conventional tube-and-wing aircraft shape.

The X-planes will typically be about half-scale of a production aircraft.

Design-and-build will take several years with aircraft starting test flights around 2020, depending on funding, according to Nasa.