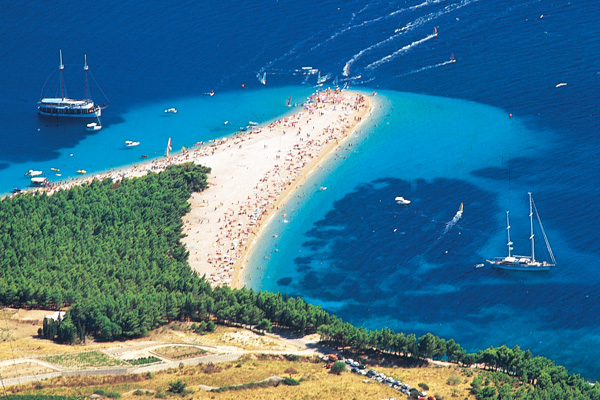 See another side of Eastern Europe, writes Katie McGonagle

It’s known as the land of low-cost weekend escapes, with the capitals of eastern Europe notching up seven of the top 10 cheapest spots in the latest Post Office city-break survey.

Chances are, most seasoned travellers will have ticked off at least a couple from that list – the likes of Prague, Budapest, Tallinn and Krakow are staples of the city-break market – but how many have strayed beyond the city bounds to see what else is on offer?

Strolling across the Charles Bridge or taking a leisurely cruise between the banks of Buda and Pest is all very well, but strike out into the countryside and there are lush forests and glassy lakes to discover, not to mention beaches and beauty spots at a fraction of the price of the Med.

Still not convinced there’s life outside the city? One look at the activities on three of Intrepid Travel’s newest tours should do the job. Active in Slovenia and Active in Croatia each blow the cobwebs away with mountain biking, hiking and rafting, plus kayaking on the latter. And the third, an expedition-style trip through Kosovo, Albania and Macedonia, heads even further off the beaten track for the trendy cafes of Macedonian capital Skopje, leafy shores of Lake Ohrid and the mosques of historic Kosovan city Prizren. For anyone who likes to be first among friends to discover a hidden gem, this comes with ample bragging rights. Prices from £1,345 land-only.

On The Go Tours has also added a 12-day Balkans Explorer trip, including a Matka Canyon boat ride at Lake Ohrid, a visit to Kravice waterfall in Croatia, and a day in Kotor, Montenegro. Prices start at £889 excluding flights.

Dubrovnik used to be the one to watch in Croatia, but it seems inland beauty spot Plitvice National Park has stolen that crown, with several operators reporting a spike in interest this year, and Anatolian Sky Holidays and Balkan Holidays adding overnight stays. On top of that, Anatolian Sky’s expanded Croatia programme also includes an adrenaline-fuelled Split Adventure, which takes thrill-seekers out into the wilderness for guided hiking around Mount Biokovo, plus canyoning and ziplining across the Cetina river.

This region might not top anyone’s culinary to-do list yet, but from hearty Hungarian to light Italian-influenced fare – not to mention some surprisingly good wines – it’s only a matter of time until it becomes better known.

Get ahead of the trend with a food‑focused tour such as Flavours of Northern Croatia & Slovenia, an eight-day trip from Back-Roads Touring that takes in wine and olive oil-tasting along the Istrian Peninsula, plus modern Slovenian cooking by Lake Bled. Prices from £1,283 land-only.

If that sounds like too much of a good thing, at least liven up a city stay with some good nosh. SuperBreak has introduced a Prague food tour which goes beyond the beer halls to sample Czech honey, smoked cheese, cured sausage and traditional Slovak pastry trdelnik around the Old Town – though fans of the hop need not worry, there are a few locally brewed beers thrown in for good measure. Prices are from £40 for adults and £25 for children.

“Bulgaria has beautiful sandy beaches, different kinds of resorts, a very low cost of living and a huge choice of modern hotels,” says Chris Rand, sales and marketing manager for regional specialist Balkan Holidays. “One look at our brochure and you can see the variety Bulgaria has to offer, from Sozopol, a genuine Bulgarian town where there are smaller, family-owned hotels, to Sunny Beach, Bulgaria’s largest resort with many hotels, a wonderful beach, two aqua parks plus a huge selection of restaurants.”

Its cheap-and-cheerful reputation won’t suit everyone, but those – especially families – in search of budget-friendly sunshine this summer will find its prices hard to beat.

Croatia’s Dalmatian coastline is practically synonymous with island-hopping cruises. These are no longer the preserve of the well-heeled yachting crowd but, thanks to their soaring popularity in the UK market, an affordable option now featured by numerous mainstream operators.

Most embark in Dubrovnik or Split, tracing a familiar route past islands such as Brac, Hvar, Korcula and Mljet. Price differences come down to the level of luxury on board or the number of shore excursions. Either way, it’s the quiet charm of these Adriatic islands and the freedom to hop off the back of the boat for a swim that will really sell this type of holiday.

Croatia is coming up in the world, if the number of high-end resorts springing up along its shores is anything to go by. Prestige Holidays marketing manager Nicky Shafe has high praise for the “beautifully renovated” five-star Hotel Park in Split, which does double duty as both a beach and city base. “The sandy Bacvice beach in Split is just a few minutes’ walk from this hotel,” says Shafe, “And it’s an easy stroll to the historic Diocletian’s Palace. Curiously, there are usually more locals enjoying this beach than visitors.”

A little farther up the coast, the new D-Resort Sibenik is attracting attention this year, with its design-oriented interiors – all white concrete, wood and glass – putting the historic town on the map for luxury lovers.

Yet the Slovenian coastline offers just as much of a thrill for those who like to seek out lesser-known spots. At just 30 miles long, it’s easy to see why it’s remained under the radar for so long, but Anatolian Sky Holidays has begun featuring the stylish Grand Hotel Bernadin, set on the seafront between Piran and Portoroz. The hotel has a private beach, and is part of a larger complex with a water park, spa and wellness centre. Prices start at £555 for seven nights, including breakfast, flights and transfers.

With so many flights connecting UK regional airports with eastern Europe’s most exciting cities, there’s no excuse for not ticking them off. Budapest and Krakow rank top of the list for customers of city‑break specialist Osprey Holidays. Of the latter, reservations consultant Diane Geddie says: “No other city in Poland can boast so many historic buildings and monuments, or such a vast collection of artworks. Wawel Castle is Krakow’s centrepiece and a must-see, but visitors will also find themselves drawn to the Old Town’s soaring Gothic churches. Krakow has many modern attractions too, with restaurants, bars and clubs tucked away down its narrow alleyways.”

For travellers who like a bit more guidance, there are countless escorted tours of the key cities. Newmarket Holidays, for example, offers an eight-day Jewels of the Baltic tour, taking in the Baroque architecture of Lithuanian capital Vilnius, the art nouveau attractions of Riga and the medieval treasures of Tallinn (from £699).

If the epic beauty of BBC drama War and Peace had clients itching to explore enigmatic Russia, Regent Holidays’ new tour, On Location with War and Peace, ought to do the trick. Tracing the characters’ journeys through the grand palaces and historic houses of Russia, Latvia and Lithuania, the 10-day trip starts at £1,735 including flights, accommodation, transfers and most meals.

Just as keen to get behind the scenes, Trafalgar’s 13-day Balkans and Venice trip invites guests to try some local cooking with a family in the village of Osojnik, near Dubrovnik, as well as taking them on an insider tour of the Sarajevo war tunnels, with first-hand tales from those who dug out these tunnels during the 1990s conflict.

Sister brand Insight Vacations also offers a window on 20th‑century conflict on its Highlights of Poland tour. As well as medieval castles, gorgeous scenery, warm hospitality in the form of traditional Polish dining in Zakopane and a visit to a brewery in Poznan, some of the most memorable moments of this trip are sure to be the visits to Auschwitz and Birkenau, led by a local expert, and seeing Oskar Schindler’s Factory museum to learn about the role he played during the Nazi occupation.

Just because there’s lots to see and do doesn’t mean this can’t be a laid-back break. Cruising along the Danube is certainly an easy way to tick off plenty of sights without having to lift a finger: Riviera Travel’s perennially popular Blue Danube river cruise takes in Bratislava, Salzburg and Vienna en route to Budapest, plus many customers also take advantage of a three-night extension in Budapest, available on selected sailings, to allow for extra sightseeing on land.

If only having to unpack once sounds appealing, Leger Holidays’ new Porec and the Istrian Riviera tour sees guests stay in Porec throughout and enjoy day trips to visit the likes of Ljubljana, Rovinj and Opatija. Cosmos Tours & Cruises has seen a similar trend, bulking up its Relax & Stay programme of single and twin-centre holidays in the region (alongside five new Balkan tours added this year), to meet demand.

Head of product Rob Goodwin says: “The Balkan area has performed well for us in the past few years as customers want to explore this fascinating region. Demand has been strong for Albania this year and our new classic tour of Romania should gain similar interest. Croatia’s Istrian Riviera is popular and our new single-centre holiday in Pula also includes a tour of the city, a day in Venice and tours of Vodnjan and Rovinj.”