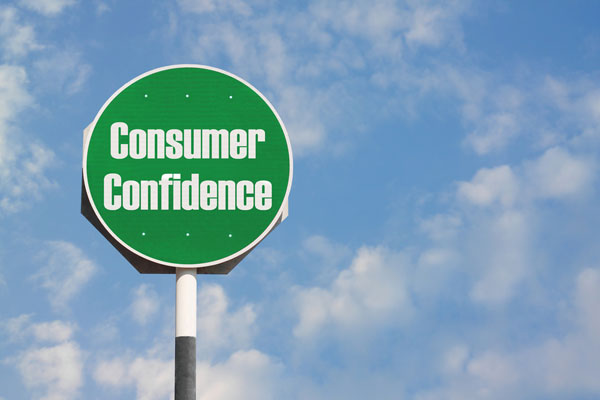 A slump in UK consumer confidence in the first quarter of the year has been revealed today (Monday).

Renewed caution in the consumer sector saw confidence fall by three percentage points year-on-year from -5% to -8%.

An unusually large seasonal decline in sentiment about general health and wellbeing was citied as being partly to blame, according to the latest quarterly consumer Tracker from Deloitte, based on a survey of 3,000 people.

The trend has been particularly pronounced this winter, with the confidence reading for health and wellbeing falling by six points from the first quarter of last year to its lowest level since the survey began in the third quarter of 2011.

The confidence gap between homeowners and non-homeowners is now at its widest point since the Consumer Tracker began. Non-homeowners reported a four point fall in confidence from the previous quarter.

Furthermore, London-based consumers were significantly less optimistic than consumers in other regions, with overall confidence in the capital falling by ten points year-on-year.

Londoners’ confidence towards job security fell by six points and disposable income by nine points, compared to the previous quarter.

The gap between ‘expansionary’ and ‘defensive’ spending behaviour has flattened since the start of the year, indicating that consumers have become more measured in their spending.

Consumers expect to spend more on essentials, such as groceries, and less on utilities and big ticket items in the coming months, possibly in anticipation of political and economic uncertainty in the short term.

Ian Stewart, chief economist at Deloitte, said: “For UK consumers, homeownership is synonymous with financial security. Those in ‘generation rent’ are starting to feel the impact of private rental prices having outstripped wage increases in recent years.

“London, with its particular exposure to developments in the global economy and financial markets, has seen a particularly marked drop in confidence.”

He added: “Despite what appears to be near-perfect economic fundamentals for UK consumers, with low unemployment, low cost of borrowing, low inflation and rising wages, confidence has taken a knock.

“Confidence in the general economic situation is now 18 points lower than at the same time last year. Greater risks in the global economy and domestic uncertainty in the run up to the EU referendum on 23rd June seem to have unsettled consumers.”

Deloitte head of consumer business research, Ben Perkins, said: “The UK’s consumers are increasingly health-conscious. The flu season arriving later than usual and extensive media coverage around health in the first three months of the year seem to have focused consumers’ attention on health and wellbeing as an issue.

“In addition, the recent sugar tax debate, as well as the growing use of health and fitness wearables and apps may also be increasing consumers’ awareness of their own wellbeing.”