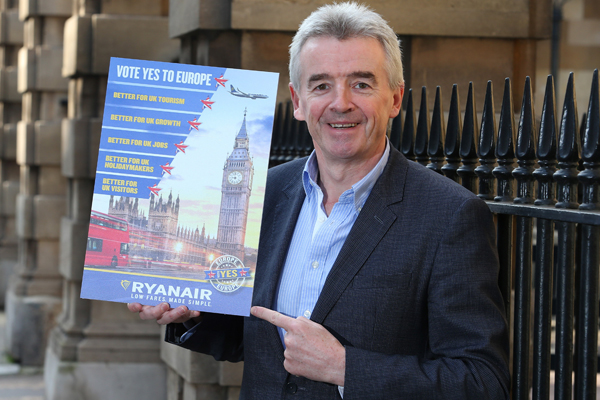 A vote to leave the EU in next month’s referendum would put the UK at risk of losing valuable inward investment, Ryanair chief executive Michael O’Leary warned today.

He was speaking as the budget carrier opened a new European training centre at Stansted alongside chancellor George Osborne.

Ryanair confirmed that the facility will create more than 1,000 jobs for pilots, cabin crew, and engineers in 2016.

O’Leary called for a strong “remain” vote in the European Referendum on June 23.

He said: “It is this type of large scale foreign inward investment that is helping to drive the UK economy and job creation.

“It is exactly this type of investment that will be lost to other competitor EU members if the UK votes to leave the European Union.

“The single market has enabled Ryanair to lead the low-fare air travel revolution in Europe, as we bring millions of British citizens to Europe each year, and welcome millions of European visitors to Britain, and we are calling on everyone to turn out in large numbers and vote ‘remain’ on June 23.

“I am absolutely certain that the UK economy is better off in Europe, and that is why Ryanair is campaigning hard and actively calling on UK voters to vote ‘remain’ on June 23.”

Osborne said: “Today’s announcement is just another example of how British jobs and livelihoods directly benefit from being part of the European Union, thanks to the billions of pounds of foreign investment which flow more to Britain than any other European country.

“As Ryanair recognise, we’re stronger, safer and better off in the European Union.”

Charlie Cornish, chief executive of MAG, owner of London Stansted, added: “Together, London Stansted and Ryanair have been at the forefront of the European air travel revolution of the last 20 years.

“When Ryanair first started flying from London Stansted, passengers had a choice of just a dozen EU destinations but this morning they can choose from over 140 EU destinations, more than at any other UK airport.

“As competition has strengthened, airlines have become more efficient, air fares have fallen, and choice has increased.

“By opening up the European travel market to competition, the EU has done far more for British consumers and businesses than any government could ever have done acting on its own.

“London Stansted delivers more European visitors into London than any other airport, generating a significant economic boost to London’s economy and UK PLC.

“Leaving the EU would undoubtedly be a huge backward step for UK aviation, a sector that employs around 1 million people and supports some of our most successful and innovative industries.”