Take some time to explore this historic port town on the northwest coast of Crete, writes Jane Foster.

Greeks generally consider Chania in Crete to be their country’s most beautiful city, an honour it vies for with mainland Nafplio. Although Chania’s history can be traced back some 5,000 years, to when the Minoans founded Kydonia here, the Old Town as you see it today is largely a combination of Venetian and Ottoman architecture.

The Venetians, who ruled Crete from 1204, made Chania (known then as La Canea) the capital, building sturdy fortifications to protect it from their arch-rivals, the Ottoman Turks. Eventually, however, in 1645 the city fell to the Ottomans, and the pasha (Turkish governor) made it his residence. And even after Crete gained independence and united with mainland Greece in 1898, Chania remained the island’s capital until 1971, when the industrial port city of Heraklion took over.

Through the centuries, Chania has always been an important intellectual and artistic centre, and today it still has an air of culture and refinement. Besides attracting tourists from the world over, it’s also a popular summer retreat for Athenians, meaning that it has plenty of authentic restaurants and cool little bars catering for Greek tastes (and staying open till late to satisfy their nocturnal socialising), putting it in a class above many of the mainstream tourist destinations on the islands.

09.00: Chania centres on the Old Harbour, built by the Venetians in the 14th century, and rimmed by Italianate buildings with mottled yellow and orange facades. Stop here for coffee at one of the numerous cafes, where locals play backgammon at sunny waterside tables. The seafront promenade curves around the harbour, which would once have accommodated some 40 Venetian galleys but these days is filled with wooden fishing boats. On the eastern side, note the former mosque, a cubic building with a dome, built by the Ottomans in 1649.

09.30: Walk up Halidon, the main street connecting the Old Harbour to the modern town, to visit the Archaeological Museum at Halidon 21. Housed in the church of a former Franciscan monastery, it traces Chania’s history from 2200BC, when the Minoans founded the ancient city-state of Kydonia, up to the Roman era. Exhibits include Minoan clay figurines (probably fertility offerings), gold jewellery, coins, sarcophagi and a third‑century Roman mosaic floor, all labelled in both Greek and English. 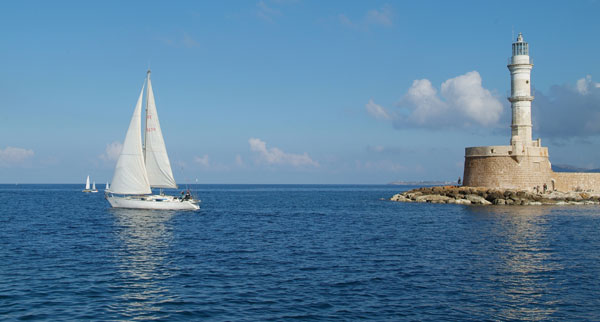 11.00: Just outside the Old Town, the Agora (covered market) on Platia Venizelou dates from 1911. Locals shop here for fresh fruit and vegetables, and there are also stores selling Cretan cheeses, Greek mountain tea, dried herbs, honey, olive oil, and olive oil-based soaps and body creams. Nearby, the Church of St Nicholas, on Platia 1821, has an extraordinary facade, with a bell tower to one side, and a minaret to the other. Dating from the 14th century, it originally served as a church, then in the 17th century became the city’s main mosque under the Ottoman Turks, only to become a church again in 1918.

13.00: Stop for lunch at informal Kouzina EPE (see Where to Eat, left), located between the Agora and the Church of St Nicholas.

14.00: Return to the Old Harbour to visit the 17th-century Firkas Fortress, housing the Maritime Museum. Besides exhibiting handmade model ships, navigational tools and naval military equipment, it displays a life-sized reconstruction of the bridge aboard a battleship, and a curious collection of shells. For anyone interested in the Second World War, there’s a section about German occupation and the Battle of Crete of 1941.

15.30: A 10-minute walk west of the Old Harbour lies Nea Chora, Chania’s main town beach. It’s a pleasant stretch of sand lined with sunbeds and umbrellas, ideal for an afternoon swim. But if you want something really special, catch a local bus to Agii Apostoli (three miles west), where two deep sheltered bays each conceal a blissful golden sand cove. 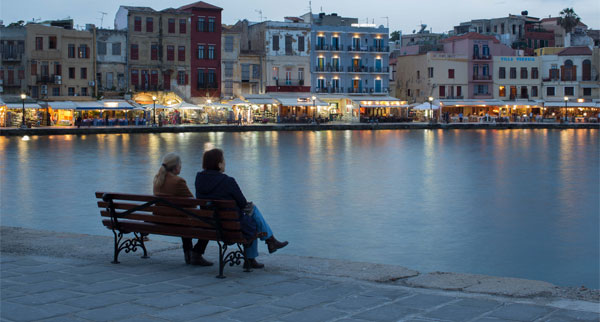 19.30: Take an evening stroll along Chania’s waterfront, east of the Old Harbour, past the 16th‑century Venetian arsenali (ship-repair sheds) and the sailing marina, then walk along the breakwater to the 19th‑century lighthouse for fantastic sunset views back across the water to town. In the past, a chain could be connected from the base of the lighthouse to the Firkas Fortress, to protect the harbour from intruders.

22.00: For after-dinner drinks, head for Sinagogi, an open-air bar in the tumbledown ruins of a former synagogue. With chill-out music and cocktails, the atmosphere is magical, and it is open until 3am.

09.30: Drive 12 miles inland to the Botanical Park & Gardens of Crete at the foot of the White Mountains. A true back-to-nature escape, this exotic park is a wilderness of flowering shrubs, orchards and herb gardens, traversed by a series of winding paths. With its mild sunny climate and fertile soils, Crete can support both Mediterranean and tropical planting, including avocados and bananas. There’s also a lake with wild birds and peacocks, and a cafe-restaurant serving dishes made from the park’s own produce, with views over the idyllic landscape. For clients without a hire car, the Botanical Park is also served by a daily bus from Chania, departing at 9am and returning at 2pm.

12.00: From here, a 10-minute drive along a narrow country road brings you to the Manousakis Winery in the village of Vatolakkos. Book in advance for an informative and enjoyable tour of the lush vineyards and cool dark cellars, followed by wine tasting and a delicious light lunch. At the end, you can also buy bottles to take home. 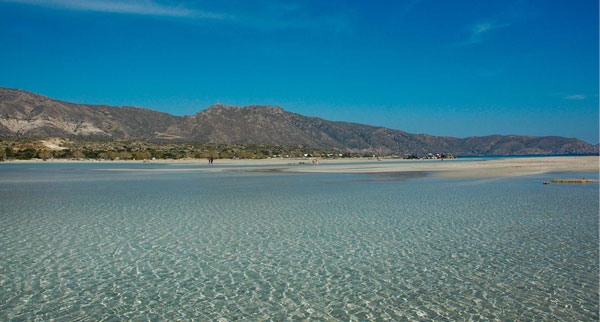 13.30: Drive to Elafonissi beach, a pleasant 46-mile route, on Crete’s isolated southwest coast. Alternatively, take the once-a-day bus from Chania which leaves at 9am and returns at 4pm.

15.00: Just before reaching the beach, stop at the 18th-century Orthodox Chrissoskalitissa Monastery, built into the rocks, like a fortress, high above the Libyan Sea. Chrissoskalitissa means ‘golden step’ and, according to local legend, one of the 98 steps leading up to the entrance is made of gold – but only the pure of heart can see it.

15.30: Arrive at Elafonissi. Here a swathe of sand, coloured pink by fragments of shells and coral, leads to a turquoise lagoon, which you can wade across through warm water, to a tiny island. As a stopping point for migratory birds flying between Europe and Africa, this is a protected nature reserve with some peaceful sandy coves. The main beach, lined with sunbeds, gets very crowded, but most day-trippers depart about 4pm, after which you’ll have the beach almost to yourself for a spectacular sunset.

19.30: Leave Elafonissi and drive back to Chania. 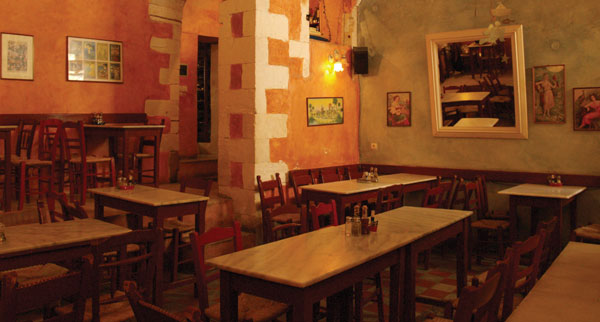 21.30: Dinner at Tamam in Chania’s Old Town. Greeks eat late, so you’re likely to be in the company of locals tonight (see Where to Eat, page 55).

23.00: A 15-minute walk across town brings you to Kibar: The Monastery of Karolos, located at Hatzimihali Daliani 22. This 16th-century monastery is now a cultural centre, with a theatre and art gallery. The courtyard hosts an open-air bar, with tables in the vaulted arcade and on a wooden deck with potted olive trees. Irresistibly romantic on a balmy summer evening, this venue serves cocktails into the early hours.

Adult-only hotel Domes Noruz Chania, a sister property to Domes of Elounda, is due to open on July 20.

Save
Kouzina EPE
Run by mother and son, this modern taverna is much-loved by locals and serves authentic home cooking. The menu changes daily, depending on what’s fresh at the market, but you can expect tasty traditional Cretan dishes, such as pasta with stewed octopus, or courgettes and tomatoes stuffed with rice and herbs.
Daskalogianni 25, Splanzia district.

Splurge
Portes
Located in a romantic stone alley, a few blocks back from the harbour, Portes serves creative Mediterranean dishes, such as chicken in lemon and saffron with rice, and pork tenderloin stuffed with peppers and cheese. Portes means ‘doors’, and the restaurant, both inside and out, is decorated with old, weathered wooden doors, which have acquired patinas with age.
Portou 48, Old Town

Fly to Chania direct with easyJet from Gatwick, or with Ryanair from Bristol, East Midlands, Glasgow, Leeds Bradford, Stansted and Manchester. Norwegian also added a three-times-a-week service from Gatwick in April, flying to Chania on a 186-seat Boeing 737-800, with one-way fares from just under £30.

In addition, easyJet, Jet2. com and Monarch fly to nearby Heraklion (88 miles east of Chania, served by a regular bus) from various UK airports.