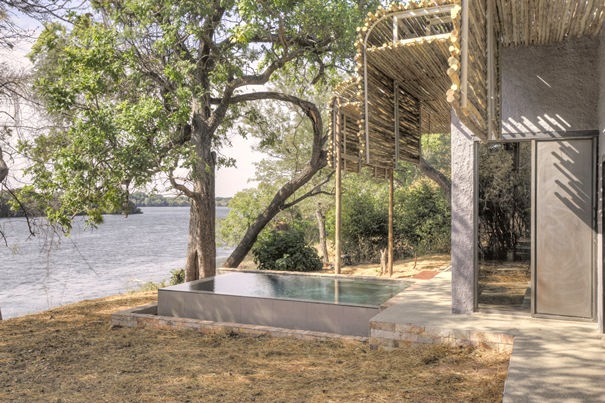 AndBeyond Matetsi River Lodge consists of two camps of nine suites each, including a family suite at each camp. Highlighting the area’s cultural heritage, Matetsi is decorated with traditional abstract carvings of wood and stone and features a strong copper theme in homage to the mineral riches of the region. The lodge has a gym, a massage sala and a 20-metre-long rim flow swimming pool stretching along the river’s bank.

A sole-use private villa, andBeyond Matetsi River House, adds exclusive accommodation for private groups of up to eight. The four-bedroom villa has a kitchen, indoor and outdoor dining areas, a private veranda overlooking the Zambezi, a swimming pool and a fire pit. It comes with a dedicated guide, private vehicle, chef and butler.

Located on one of the largest wildlife concessions in the area and with extensive river frontage the lodge claims to offer the most rich and exclusive game viewing experience in Victoria Falls. Extensive planning and reserve management has taken place on the concession for almost two years, encouraging wildlife to thrive.

As part of the project, 14 new waterholes have been created on the reserve, using strategically placed troughs and solar pumps. Additional pumps have been placed at existing boreholes to ensure a steady water supply.

A new network of roads has opened up the reserve for game drives, while bush clearing programmes have limited the encroachment of fast-growing plant species, increasing the habitat for plains game.

The wildlife population has also benefitted from increased security efforts, with both armed National Parks staff and privately sourced employees being used for anti-poaching patrols.

Guests are promised exceptional game viewing on drives led by highly trained andBeyond guides, including consistent sightings of zebra, giraffe and buffalo, as well as the big herds of elephant.

Wild dogs and hyena are spotted on a regular basis and large prides of lion have made the reserve their home. Cheetah, and leopard, as well as sable and roan antelope are also among the species seen at Matetsi.

Chief executive Joss Kent said: “Having originally been involved in the conversion of the Matetsi concession from wildlife hunting to photographic safaris, we are very excited to be relaunching Matetsi to the world.

“Not only does this well-loved reserve offer an outstanding guest experience for its stunning location on the banks of the mighty Zambezi River, but it also allows them the opportunity to tour the world-famous Victoria Falls in true andBeyond style, using our own vehicles and guides.

“The lodge itself will without question also set a new standard in Zimbabwe and at Victoria Falls.”