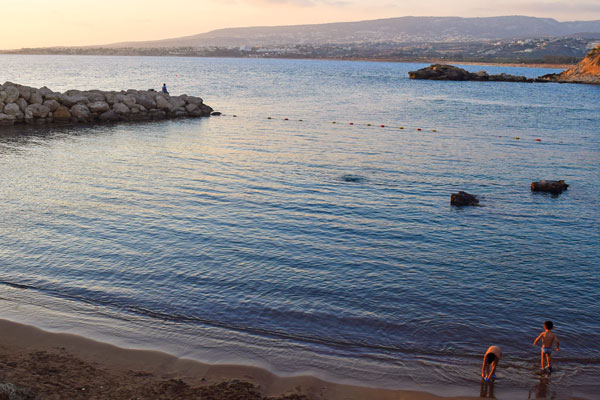 A trip for two or with the little ones in tow? Sun-blessed Cyprus has got the lot.

Whether clients want a sun-splashed family holiday by the beach or an idyllic adult-only retreat, Cyprus has it by the bucket and spade-full.

The destination has proved a hit with the Brits for decades, thanks to its winning combination of friendly locals, fantastic food, historic sites, and not least its impressive selection of hotels, from romantic boutiques to family-friendly resorts.

Cyprus is continuing to up its game too, with more hotels popping up this year, a new cruise ship terminal for Larnaca, and Paphos set to take the European Capital of Culture crown in 2017.

Its waters have been named the cleanest in Europe, making the beaches appealing for snorkellers and those with little ones, while a mild climate makes Cyprus popular for Easter or October half-term breaks.

It’s not just about beaches, though: for explorers big and small, there are sleepy mountain villages to walk through, ancient ruins to discover, and a whole host of activities to dive into.

“Our clients with families always comment on how welcoming the locals are towards children in Cyprus,” says David Skillicorn, general manager at Prestige Holidays.

This is complemented by wide-ranging family facilities offered by various hotels, many of which have kids’ clubs catering to different ages, children’s pools, and plenty of activities on offer.

The resorts best suited to families can be found across the main resort towns of Paphos, Limassol, Larnaca and Protaras. 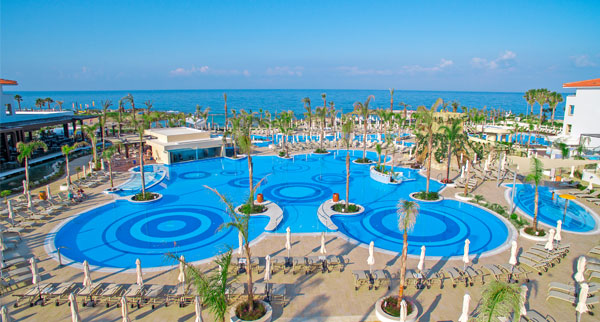 Paphos: Popular Paphos will prove a hit with the kids thanks to Aphrodite Waterpark, where rides range from the tame to the hair-raising, and Paphos Zoo, the largest in Cyprus, which also has an on-site farm.

Attraction World packages up the zoo with a seafront lunch and an afternoon yachting trip on the Blue Lagoon to make a full day of fun, from £59 per adult and £29 per child under 11.

Parents with tiny tots might well be apprehensive about taking them abroad for the first time, even to somewhere as welcoming as Cyprus. That’s where the Almyra in Paphos comes in: Prestige Holidays highlights this chic property not just for its kids’ club – which is for ages three to 12, with babies from four months cared for in the creche – but also for its brilliant Baby Go Lightly service. Anyone who’s packed a suitcase for a six-month-old then wondered where their own clothes are supposed to go will know why this is music to new mums’ and dads’ ears.

Staff can provide everything from bottle warmers to baby baths, while toddlers will love the playroom, and older brothers and sisters have access to a special ‘teen zone’ at the adjacent sister hotel, Annabelle.

Catering to kids of different ages can be a challenge, but Lauren Ross, product and commercial manager for Europe at Travel 2, says the Elysium Hotel in Paphos is the answer to that particular puzzle. It comes with a playground, entertainment room and kids’ club. If parents want a little time out, the hotel also offers a 24‑hour babysitting service for a small charge.

Cyprus isn’t short of all-inclusive options, but one which has really grabbed agents’ attention over the past few years is the Olympic Lagoon Resort Paphos, which opened last year following a major overhaul. Set on a Blue Flag beach, the hotel features five swimming pools and a kids’ and teens’ club offering activities for age groups from six months to 17 years.

Family suites can comfortably accommodate larger broods – essential if your clients don’t want to be falling over each other in a standard room or to book interconnecting options. 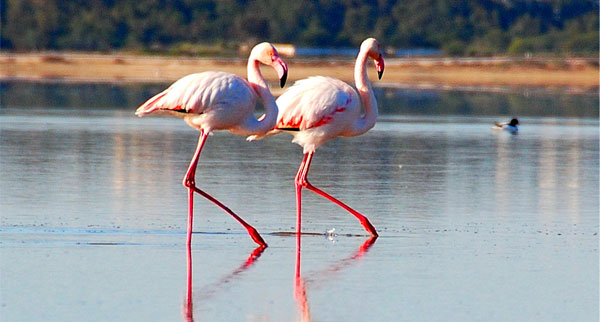 Larnaca: “Larnaca is possibly the most underrated resort in Cyprus, but it shouldn’t be,” says Photis Lambrianides, commercial director at Olympic Holidays. “It offers several miles of sandy beaches with shallow waters, which are ideal for families with young children. The Finikoudes seafront offers an expansive beach, children’s playground, and lovely inexpensive restaurants and bars.”

The area also boasts a camel park, salt lakes that attract flocks of flamingos, and plenty of cycle routes, making it fun for families to get around.

Clients seeking added value should consider all-inclusive hotels such as the Princess Beach Hotel in Larnaca, or the popular Palm Beach Hotel & Bungalows, whose 40 refurbished bungalows will easily accommodate families. 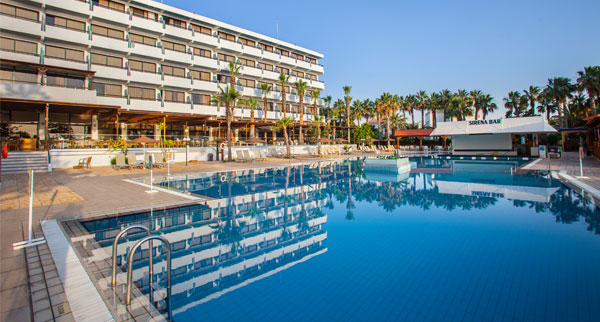 Protaras: For families seeking fun in the sun, the resort of Protaras boasts 10 miles of coastline with stunning bays and idyllic coves, complete with a variety of water sports, making it popular with teenagers.

Also in the area is the Tsokkos Gardens Hotel, which Monarch recommends for its lush and extensive gardens, swimming pool and free unlimited access to the nearby waterpark. Prices for May half‑term start from £669 based on two adults and two children sharing a family room.

Known in mythology as the birthplace of Aphrodite, the ‘Island of Love’ is a haven for couples, whether they want to spend their days walking arm in arm along the coast or trekking through the verdant Akamas Peninsula. 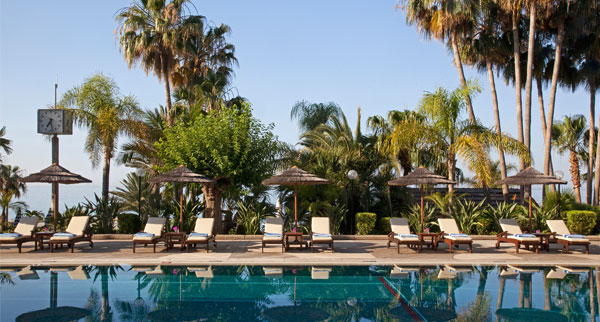 Limassol: Olympic Holidays’ Lambrianides brands Limassol “the most cosmopolitan resort in Cyprus”, and rightly so. He says: “It offers a huge variety of restaurants and tavernas, especially on the seaside strip, which runs from the Amathus Beach Hotel all the way to the tastefully developed castle area and Limassol Marina.”

If couples fancy all the facilities of a larger property, but are less keen on having excitable tots toddling around them, Prestige Holidays suggests booking one of the Garden Studios at the Four Seasons Hotel Cyprus in Limassol. Set in an intimate adult-only section within the hotel, complete with recently renovated suites, a river-style pool and bar area, private Jacuzzis and a Shiseido Spa, it really is the best of both worlds. 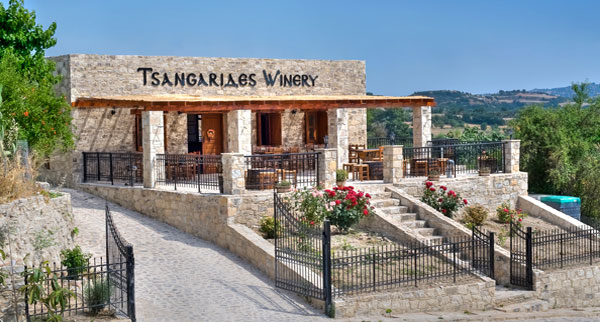 Paphos: History abounds in Paphos, which is peppered with archaeological sites, including the Temple of Aphrodite, dating from the 12th century BC, and the Tombs of the Kings. It’s the spot to send couples with a cultural bent, especially next year when the programme of events marking its role as European Capital of Culture gets underway.

It’s not all confined to the town either: each of the villages has its own cultural quirks, from tiny one-room museums celebrating Cypriot life to sweeping vineyards offering a nod to another equally important tradition – wine.

Couples can reward themselves for their sightseeing efforts with a tasting at Tsangarides Winery in the village of Lemona. The winery blends traditional Cypriot wine-making skills with modern techniques to produce a tipple regarded by many as the best in the region.

Follow it up with a scenic sunset drive past Aphrodite’s Rock (provided they haven’t sampled too much of the vintner’s efforts) or an evening stroll along the harbour boardwalk with Paphos Castle in the distance, to turn up the romance factor.

For a luxury escape right in the heart of Paphos, Thomson’s 5T-rated Sensimar Pioneer Beach Hotel is a perennial favourite with couples. When they’re ready to take a break from the sunshine, there’s a spa in which to wind down, whirlpool baths and a steam room, and a choice of four restaurants and three bars. 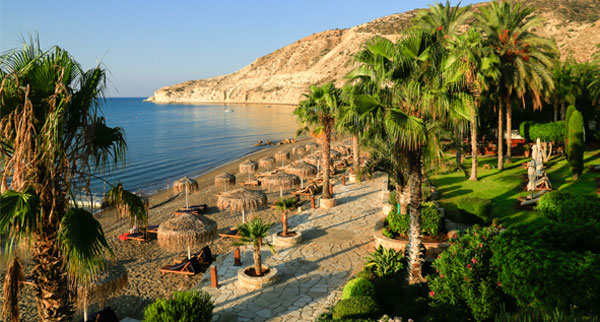 Pissouri: Edging around the coast, Classic Collection Holidays recommends Columbia Beach Resort as an alternative secluded, all-suite option, located a half‑hour drive from Paphos in Pissouri. The luxury hotel is built around a lagoon pool and has its own stretch of beach and a great spa.

Those on more of a budget could also consider the adult-only Sunset Bay Garden Apartments, which feature stunning views across the bay. Prices start from £469 based on two sharing for a week with Jet2holidays. 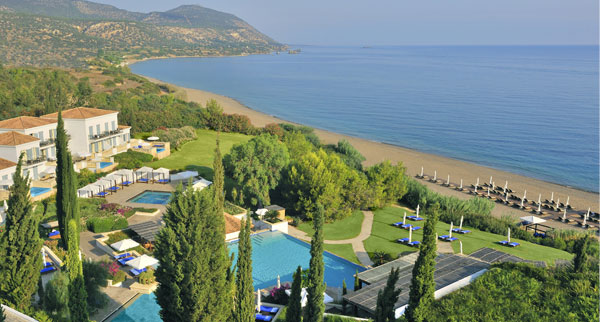 Latchi: Fancy escaping the crowds? Instead of driving east out of Paphos, send clients in the other direction, towards the sleepy northwestern villages of Latchi and Polis, where they’ll find an authentic slice of slow-paced Cypriot life. The area is home to the luxury spa hotel Anassa, which offers spectacular views, along with its five restaurants, the Thalassa Spa and activities that range from horse riding to water sports.

Travel 2 offers a week at Elysium Beach Resort, Paphos, from £589pp based on four sharing a maisonette, February 3, 2017.travel2.com

Classic Collection Holidays offers seven nights at Columbia Beach Resort, Pissouri, from £1,158 in May 2017, based on two sharing a junior suite.classic-collection.co.uk

“Cyprus has welcomed both couples and families from the UK in their millions over the years, and has always been seen as a safe bet for families, with plenty to do for smaller children as well as teenagers. Couples flock here too as it is the island of love and promises plenty of romance, and also has a great choice of where to stay, from trendy boutique hotels to gorgeous villas with private pools and adult-only all-inclusives. Cyprus attracts both families and couples year-round, so agents can sell it with ease and peace of mind.”