I’m having a staring contest with a fish – a huge, black, demonic thing curled up like a snake with an eyeball the size of my thumb and a mouth that looks like it’s about to snap shut and eat me. Next to it lie a pile of slimy lobsters, a mound of silvery sardines and a trio of shiny, beady-eyed rays.

I’m at the local market in the Algarve fishing village of Olhao, basking in the novelty of seeing something other than my local Tesco, because – yes – travel is back on. Around me, locals call out to each other in Portuguese, vendors pound fish with huge knives and overpowering smells waft around in a way you just don’t get in good old Blighty – and it’s invigorating.

I’m on a trip to see what travel to Portugal is like in the green list era, while exploring another side to one of the country’s most-visited regions – and Olhao is exactly that.

This sleepy coastal town rose to prominence as a fishing hub in the 17th century and remains one of the Algarve’s main ports. Today, locals come from far and wide to check out its lively market, where pungent fish and Portuguese delicacies are housed in burgundy-painted pavilions lining the sparkling harbour.

I browse rows of honey and sweets, dried fruit and olives, then wander Olhao’s cobbled old quarter, where half-dilapidated buildings in white, blue, pink and yellow house one-off craft shops (it’s a hub for creatives, I’m told by a painter) and sleepy boutiques.

It’s an idyllic scene and, bar the face masks, it doesn’t feel far removed from pre-Covid normality – albeit with a lot more locals than tourists. That’s a feeling I get used to over the following days, as I explore the highlights in and around Faro and Albufeira, discovering a more ‘authentic’ side to the region best-known for its beaches, golf courses and big-name resorts. 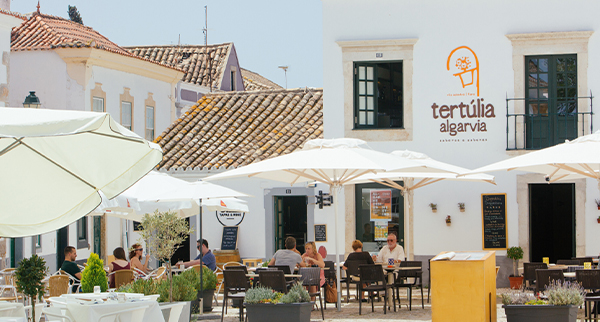 My exploration begins in Faro. While the capital of the Algarve is generally seen as the entry point to the region rather than a destination in its own right, I quickly discover it’s more than just a gateway.

Wandering its walled Old Town reveals shiny cobbled lanes and dainty archways, colourful buildings and tree-lined plazas. Intricate Arabian patterns hark back to the city’s 500 years of Moorish occupation, while half-crumbling houses recall an 18th-century earthquake that damaged many of its buildings.

At its heart is the cathedral, an imposing feat of Gothic, Renaissance and baroque influences first built in the 13th century and restored several times since. Here, gold-strewn interiors, ornate statues and blue-and-white tiles are topped by a huge bell tower that visitors can ascend for panoramic city views.

We stop for lunch at local taverna Tertulia Algarvia to sample the region’s specialities – including cataplana, a tomatoey concoction of razor clams, king prawns and monkfish – before wandering over to the ‘new town’, a network of manicured cobbled lanes lined with high-end boutiques and outdoor cafes, where locals sip Sagres lager and wine.

But it’s not just about the culture here. Boat trips take visitors around the nearby Ria Formosa Natural Park – a cluster of islands, lagoons, marshes and reefs that stretches nearly 40 miles along the coastline.

We hop over to Faro Island (the only one accessible by car) to see exotic birds soaring above the sea – this is a migratory route from Europe to Africa – and flop on a beach that we have almost entirely to ourselves. I get the feeling this is because the beach is something of a locals’ secret, popular with Faro’s city dwellers who cycle its boardwalks and sail between its isles, and is set largely off the main tourist trail. 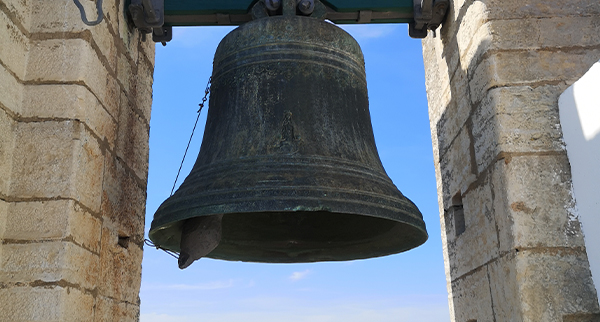 I get a similar sense when we venture over to the Seven Hanging Valleys Trail, a 50-minute drive west of Faro (or half-an-hour from Albufeira), for a hike along the coast.

Considered one of the country’s most picturesque walks, this dramatic trek from Praia da Marinha takes you meandering along reddish sandstone cliffs to see craggy sea arches, towering stacks and ochre-coloured rocks jutting out of the Atlantic, and it’s deserted but for a few hardy souls.

“The views more than make up for the effort, with lookout points across the likes of Benagil Beach”

A series of wooden steps take you up and down the cliffs through arid, bushy scrubland, with waymarked trails involving some clambering up slippery rocks. But the views more than make up for the effort, with lookout points across the likes of Benagil Beach, home to a famous, blacked-out cave etched into the limestone, and Carvalho, a peaceful cove sandwiched between champagne-coloured cliffs and cerulean waters. 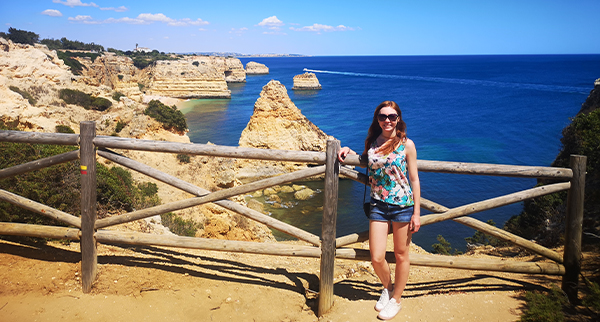 Later we head to Albufeira Marina and board a speedboat with local cruise company Dream Wave to view the coastline from another perspective, and it’s spectacular. We pass famous formations like the ‘yellow submarine’ rock, so-named for its apparent resemblance to a honey-coloured ship, and sail through the Carvoeiro Caves to marvel at marble-swirled rockfaces arching above a stretch of rippling blue.

Afterwards, we speed out into the deep, lurching up and down on the waves in an attempt to spot dolphins swimming in the wild. We don’t manage to see any, but the feeling of being out on the open sea without a care in the world more than makes up for it.

“Soon, there’s a pod of five glistening dolphins bobbing in and out of the water”

But later in the day, something unexpected happens. During an impromptu stop at Praia dos Pescadores, in Albufeira’s cobbled Old Town, we glimpse a dark shape arching out of the water – then another, and another, and another. Soon, there’s a pod of five glistening dolphins bobbing in and out of the water only a few metres from the shore. After seven months of staring out over the dolphin-less shores of my home town, Southend-on-Sea, it feels surreal, to say the least.

That unexpected moment seemed to sum up the essence of my trip. The most memorable things proved to be the surprise, impromptu experiences I wasn’t expecting – a conversation in a local craft shop, an encounter with an unfamiliar type of fish at a busy market – and it left me wanting to dig deeper into a region I thought I already knew.

It might have taken three tests, some extra expenses and a bit of planning to get here, but it was well worth the effort. And I honestly couldn’t put a price tag on the feeling of finally jetting away after a year of on-and-off lockdowns, discovering new places within a firm old favourite and seeing sights I’ll never take for granted again. 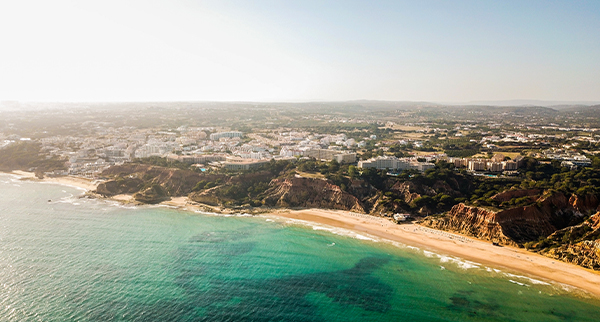 ❂ For mainland Portugal, all travellers over the age of two must show proof of a negative PCR test, taken within 72 hours before travel, on boarding (NHS tests aren’t accepted). They’ll also need to order a PCR test to take on day two after their return, and proof of this booking reference is required when boarding the return flight.

❂ In addition, all travellers over 11 need to take a lateral flow, antigen or PCR test before returning to the UK. Some airlines, such as Ryanair, need this to be taken by a medical professional, so check with the airline.

❂ Some hotels offer antigen tests and the tourist board lists testing sites on its website. Lateral flow tests are also offered at Faro airport (administered by a professional) with results in around 30 minutes for €30. Travellers can’t check in until they have proof of the negative result, so it’s recommended they arrive four hours before departure.

❂ Clients also need to fill in a Passenger Locator Form before flying to Portugal and before returning to the UK.

❂ Masks need to be worn inside and outdoors in busy areas where social distancing is not possible. 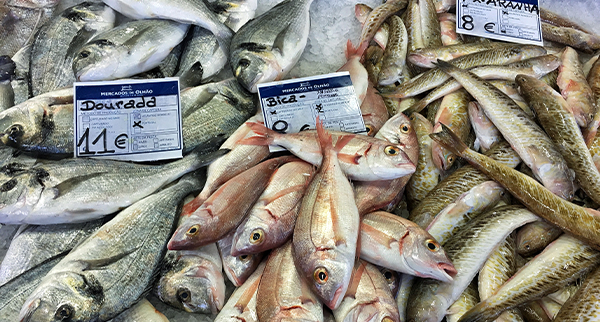 Pine Cliffs, A Luxury Collection Resort, Albufeira: This sprawling, family-friendly complex comprises luxury villas, apartments and a main hotel, with a nine-hole golf course, tennis academy, spa, kids’ club, three outdoor pools and a private, sandy beach among its facilities. There are 11 bars and restaurants, including an elegant champagne bar, but the real USP is its position, perched among reddish clifftops, with wooden steps leading down to the sea and views that made my jaw drop at every turn. A one-bedroom Garden Suite costs from €180 per night in low season (room-only).
pinecliffs.com

Hotel Faro & Beach Club, Faro: Set in front of Faro’s marina and a five-minute stroll from the Old Town, the location is the biggest seller at this small, laid-back four-star, with a rooftop whirlpool, cocktail bar and restaurant overlooking the city. Rooms (pictured) are comfortable with idyllic views over the marina, and the hotel has its own beach club a fourmile drive away, with a shuttle bus on hand for those without a car. Nightly rates from €84, including breakfast.
hotelfaro.pt 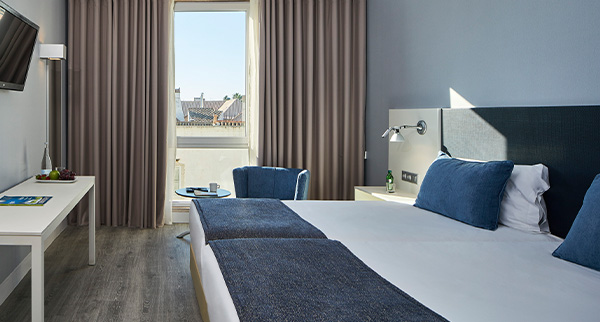 Jet2holidays offers a week at Pine Cliffs Hotel, a Luxury Collection Resort, from £1,239, including breakfast, transfers and flights from Leeds Bradford on June 26.
jet2holidays.com 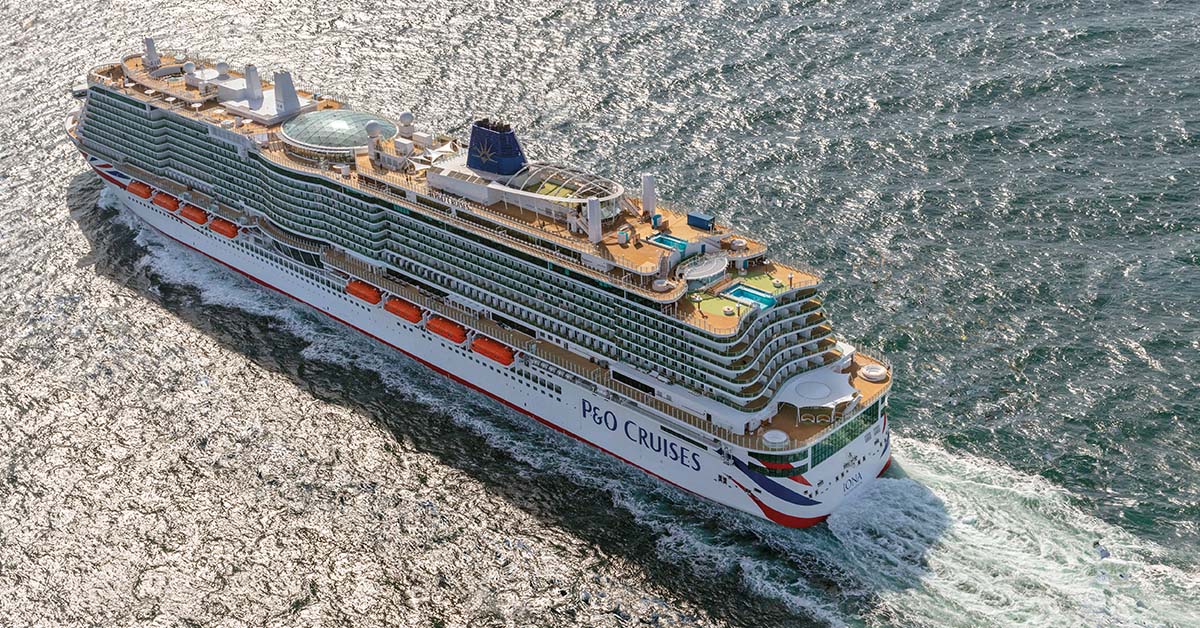