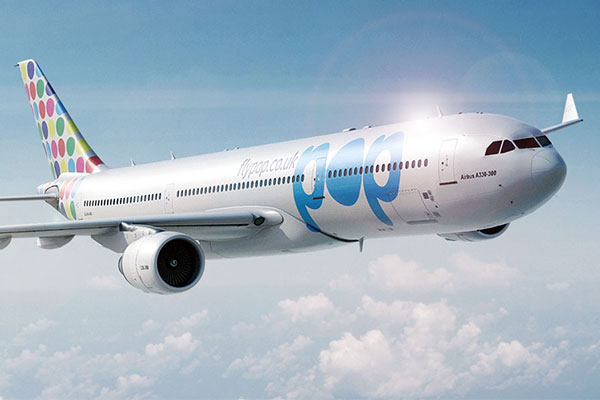 UK budget long–haul start-up carrier flypop expects to launch in the autumn after agreeing to lease a fleet of widebody aircraft.

The airline has received a £5 million via a three-year government loan as it aims to start flights between the UK and India with fares starting at £150 one-way.

An application for an air operators certificate has been made to the Civil Aviation Authority on the back of the aircraft lease deal and more than £12 million raised from UK private equity and Indian investors.

The carrier plans to start in October with a single 400-seat Airbus A330, with additional aircraft added every six months.

An initial three aircraft are being leased from Irish leasing firm Avolon.

Avolon offered the most competitive rate and a pipeline of aircraft into 2023, according to the airline.

Base and destination negotiations are still ongoing but flig hts could run from Heathrow if low enough airport charges can be agreed.

Flypop founder ands chief executive Navdip Singh Judge said: “As a twin-engine double-aisle wide-body that can carry over 400 passengers, the A330-300 aircraft will deliver everything we want to offer our passengers, especially the lowest seat prices to India.

“With this lease deal we have been able to submit our AOC application to the UK Civil Aviation Authority and expect our first flights to commence by October.

“And many thanks to the UK government’s Future Fund for its financial assistance, which has enabled us to raise further funding.

“Increased flight connectivity, especially on new routes, will create much needed economic benefits for both the UK and India.”

Former Ryanair director Charlie Clifton, who has joined flypop as senior operations adviser and board member, said: “The incumbents have been badly wounded after 18 months without any revenue but plenty of costs and debt.

“Flypop, on the other hand has avoided any exposure to the pandemic and consequently is in the unique and fortunate position to extract maximum advantage from the lower costs resulting from the crisis.

“Flypop’s cost of entry is much lower now than it would have been pre-Covid-19. Low fares always stimulate greater demand. The sector is currently on the floor, but the market will return strongly.”

Avolon marketing senior vice president EMEA Martyn Lewis added: “We look forward to working with flypop on its exciting imminent launch of flights between the UK and India.

“We will work with flypop on its future growth strategy and expansion of routes and provide further aircraft as required.

“At launch, flypop will commence operations with one aircraft and plans to add an extra aircraft every six months. It’s not every day we help launch a new British long-haul scheduled carrier.”