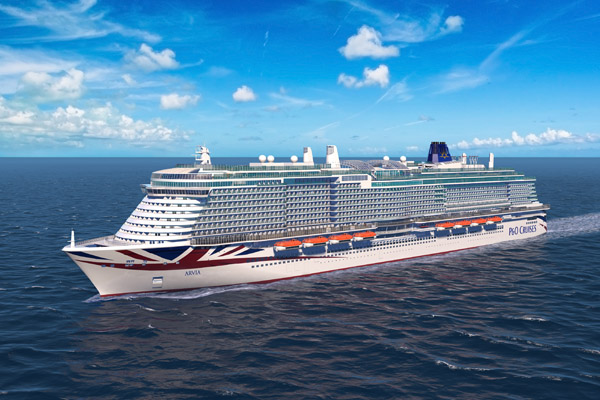 P&O Cruises’ new ship Arvia will sail a 14-night Canary Islands maiden voyage from Southampton and a Christmas and New Year cruise to the archipelago before transferring for its inaugural season in the Caribbean.

Arvia’s debut departures in December 2022 are part of a new winter programme which also features the line’s first Canary Islands fly-cruises and a 99-night world cruise.

The fly-cruises will operate from Tenerife, with Azura offering two alternating seven-night itineraries which can be combined for a 14-night option taking in Madeira, La Palma, Fuerteventura, Tenerife, Madeira, Gran Canaria and Lanzarote.

Meanwhile, Arcadia will depart on a 99-night world cruise on January 3, 2023, with calls including Sydney, Hong Kong, Singapore, Dubai, Tauranga in New Zealand and Kuala Lumpur (from Port Kelang).

And Aurora will embark on a 65-night circumnavigation of South America on January 6, 2023, including two days in Rio de Janeiro, Montevideo, San Antonio and Lima (from Callao).

“We’re all longing to get back to travelling the world so we’re making it as easy as possible to have a P&O Cruises holiday to look forward to. All our winter 2022 holidays are available with flexible booking terms, 5% low deposit, plus the opportunity to spread the cost monthly at no additional cost.”

Other itineraries announced include short breaks to Europe on Ventura, which will also sail ex-UK Caribbean itineraries, and fly-cruise options in the Caribbean onboard flagship Britannia.

Pre-registration for winter 2022 holidays opens on Thursday (April 8), with holidays on Arvia on sale from April 21 and the rest of the fleet from April 28.