Despite the challenges the industry is facing, suppliers and agents are showing their support for the LGBTQ+ community during Pride Month. Harry Kemble reports

Although travel has remained largely on pause this year, companies have not let the pandemic hinder their support for the LGBTQ+ community during Pride Month in June.

Some events may be virtual, but the message is very human. Travel is an industry that is committed to continuing its track record of being loud and proud in support of Pride.

To mark this year’s Pride Month, Disneyland Paris – due to reopen on June 17 – is encouraging fans of the French park to dance along virtually to a new track.

The song, Around the World, can be found on Disneyland Paris’s social media channels, with people encouraged to share their moves on their own accounts.

In addition, proceeds generated from a new collection of Disney products on sale at Walt Disney World Resort in Florida – which has partially reopened – will be donated to organisations that support the LGBTQ+ community.

Celebrity Cruises, which has been throwing an annual Pride Party at Sea event across its fleet since 2017, will mark this year’s occasion with events on three ships as it prepares to resume operations this month.

Flagship Celebrity Apex, sister vessel Celebrity Edge and Celebrity Millennium will be lit up in rainbow colours, hoist the Pride flag and host onboard performances dedicated to the global movement, with a Pride signature cocktail available for guests. 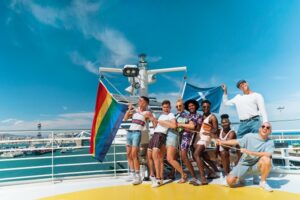 Celebrity’s Europe boss, Jo Rzymowska, says: “This Pride month is a little different for us as we concentrate on our healthy return to service plans. But we remain committed to championing diversity in every element of our business.”

Other lines, including Princess Cruises, Virgin Voyages, P&O Cruises and Royal Caribbean International, have incorporated the Pride flag in their brand logos on social media.

P&O Cruises staff will attend Southampton Pride at the city’s Guildhall in August, for which the line is headline sponsor.

Virgin Voyages has shared footage online of its crew talking about what Pride means to them, as well as posting a blog saying how diversity is “one of the things we’re most proud of”.

The blog reflects on previous Pride celebrations. In 2019, Virgin Group founder Sir Richard Branson donned a rainbow waistcoat and a themed captain’s hat in New York, where the movement was born 52 years ago when the Stonewall uprising followed a police raid on a gay nightclub.

Staff at Tui, which has added the rainbow flag to logos across its social channels, will share stories about their experiences before celebrating Pride Day on June 28.

Operator Classic Collection has encouraged employees to learn more about Pride and shared statistics from Stonewall and the Government Equalities Office. It will host a Pride-themed film club on June 22.

Agent Marco Macchieraldo, who has overseen the LGBTQ+ content posted online by cruise specialist Paramount Cruises, said it was crucial businesses do more than rainbow-wash their social media accounts.

“It is important to have something a bit more in-depth,” he said.

As well as tweaking its social logo, Paramount posted the first in a series of blog posts about LGBTQ+ cruising last week. The post was written by Kevin Cook, a consultant at the London-based cruise agency.