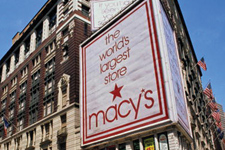 A Christmas shopping trip to the US doesn’t need to start with a schlep to London.

Several airlines operate non-stop flights from UK regional airports, which can be more convenient than travelling via Heathrow or Gatwick.

New York is well known for its excellent shopping but other US cities, including Chicago and Washington DC, offer a similar blend of shops, sightseeing and entertainment.

And with the pound buying more than $2, it’s a great time to go. All prices are for December travel.

For Macy’s and Sears, head south of the Chicago River to State Street, where you’ll find Jeweller’s Row. And for some seasonal cheer visit Christkindlemarket in Daley Plaza, which runs from November 23 to December 24.

Start the day with breakfast at Lou Mitchell’s on Jackson Boulevard, open from 5am.

For dinner, steaks and pizza are pretty much the staple food in the Windy City and Avenue M on Milwaukee Avenue, Gene and Georgetti on Franklin Street, and Gibsons Steakhouse on North Rush Street have some of the best.

For something more unusual, take an evening culinary tour of the city with Chicago Dine-Around, which takes guests to different restaurants for each course.

Try to get tickets to see American football team the Chicago Bears or, if you’re with the family, head to the Zoolights Festival at Lincoln Park Zoo, which has giant illuminated animal figures throughout December.

Gold Medal has four nights in Chicago from £699, including flights with bmi and room-only accommodation at the three-star Chicago Essex Inn.

From flagship stores such as Macy’s (the world’s largest), Bloomingdale’s and Saks Fifth Avenue, to designer boutiques such as Jimmy Choo, New York has it all.

You’ll find luxury brands along Madison Avenue and in SoHo, but for funkier items go to the Lower East Side, where you’ll find Alife Rivington Club, a temple to trainers, and Recon, great for streetwear.

For the best deals, hop on a bus to Woodbury Common Premium Outlets, about an hour from Manhattan, which has over 220 shops selling everything at knock-down prices.

A useful website is nymag.com, which includes tips on bargain hunting in New York, the latest shop discounts and new shop openings.

You’re never further than a fork’s throw from a diner selling all-day breakfasts, burgers and sandwiches in New York, but for the best all-American food try Blue Hill in Greenwich Village, or Diner 24 and Pop Burger in Chelsea.

Many visitors like to take in a Broadway show, but if theatre isn’t your thing, take a tour of the city’s legendary jazz bars, spend a night at a comedy club or hit a nightclub.

Continental Airlines Vacations has three nights at the four-star Millennium UN Plaza from £689, including flights, a Macy’s 11% discount card and a discount shoe card offering 15% off purchases in Greenwich Village.

Georgetown Park is the top shopping area in Washingotn DC, with a selection of fashion, toys, jewellery and electronics and music stores.

Union Station, the city’s train station-cum-shopping mall (with 130 shops), also serves as a venue for exhibitions and cultural events.

For great views go to the 10-storey Old Post Office Pavilion in the heart of the city, which has a 270ft observation deck.

For classic southern food such as jambalaya, fried green tomatoes and strawberry cheesecake, try B Smith’s on Massachusetts Avenue or, for something more festive, try the traditional 1789 Restaurant in Georgetown, which specialises in Christmas dinners.

Georgetown has a smattering of good bars such as J Paul’s and the Blues Alley jazz club. For hot dance clubs go to the Dupont Circle district; for theatre try the Kennedy Center.

MAXjet has all-business class flights from £799 return in mid-December, including tax. Four nights at the three-star Holiday Inn in the heart of Georgetown costs £320 per person twin-share.