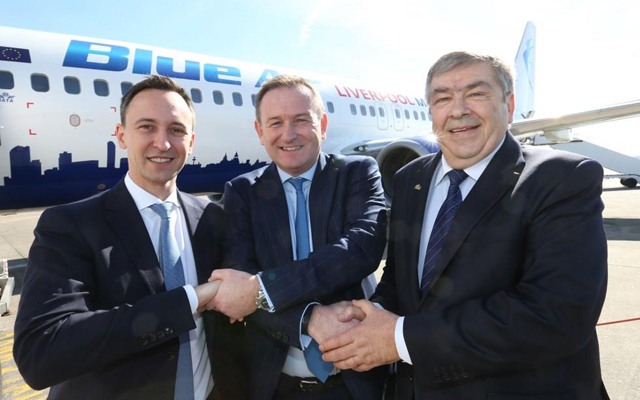 Romanian budget carrier Blue Air is adding four new routes this week as it bases an aircraft at Liverpool John Lennon airport for the first time.

Daily flights will run to Rome Fiumicino, with four a week to Milan Bergamo and Hamburg, and three a week to Alicante.

The new services will complement existing flights from Liverpool to three destinations in Romania and a twice-weekly service to Larnaca in Cyprus from June.

Liverpool is Blue Air’s eighth European base, with a 189-seat Boeing 737-800 in a special livery to operate from the airport for the summer.

The decision to base an aircraft at Liverpool will create up to 35 jobs.

Airport chief executive, Andrew Cornish, speaking on Friday as the airline ran a special familiarisation flight, said: “Today has been a tremendous occasion with guests from across the city region helping to give a great welcome to the team from Blue Air in recognition of their latest commitment to Liverpool.”

He described the creation of the Liverpool base as a “significant financial investment”.

Blue Air chief executive, Gheorghe Racaru, added: “It is indeed a proud moment for us at Blue Air to further expand our European network with the addition of Liverpool as our eighth operational base.

“We are confident that our actions will make north-west England more accessible, further boost tourism and foster economic development in the region.

“Our based 737-800 will connect Liverpool to the currently unserved Rome, Milan and Hamburg, while also offering an increased offer on the Alicante sector.

“We look forward to sustaining the local economy, and subsequently increasing our presence at the airport with even more routes in the coming future.”