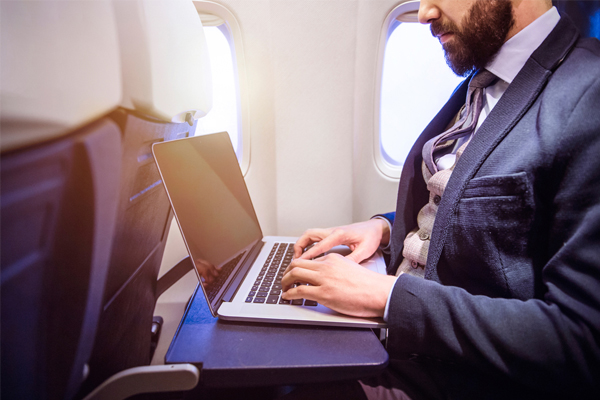 Business travellers are likely to reduce travel to the US, Europe and through European hub airports should an aircraft cabin ‘laptop ban’ be extended, a new poll suggests.

Only 4% predicted no decline at all, according to the study conducted by the Business Travel Coalition covering travel managers in the UK, Ireland, the US and five European countries.

It found that 60% of respondents’ travel policies prohibit laptops from being checked in and stored in aircraft baggage holds.

A total of 83% said the biggest impact to productivity would be if travellers were unable to have access to their laptops during a multi-day business trip to the US, EU or elsewhere.

A minority (12.5%) were concerned about lost productivity during a flight, while 4% were unsure where the biggest impact would be.

More than 62% of business travellers who currently connect in Europe to points east and west would be very likely (41.6%) or somewhat likely (20.8%) to seek alternative airlines or routings to reach their destinations if the ban were to be extended.

One unnamed respondent said: “The ban would be dramatic for both business and leisure travellers, and be considered a very heavily hostile action against travellers. We expect bankruptcies in travel organisations due to this implementation.”

Business Travel Coalition founder Kevin Mitchell said: “These survey results should illuminate the economic risk of such a ban on electronics that are larger than a cell phone and encourage the US Department of Homeland Security to collaborate with travel industry stakeholders to identify, test and deploy risk mitigation solutions short of a ban on laptops and tablets.

“What’s more, the electronics ban from Middle East and North African airports – some of the most secure in the world – needs to be modified and consistent with all airports with departing flights to the US.

“As Reuters reported today, ‘Venezuela possesses 5,000 Russian- made MANPADS surface-to-air weapons… the largest known stockpile in Latin America and a source of concern for U.S. officials amid the country’s mounting turmoil.’

“These weapons pose a serious threat to commercial aircraft and are available on the black market all over the world. By logical extension – from the current and proposed electronics bans – if the Department of Homeland Security does not take risk management seriously, will we then have to stop flying?”