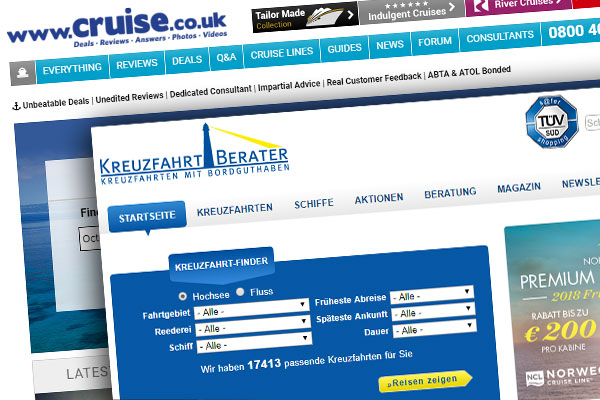 Cruise.co.uk, which operates the UK’s most popular cruise website behind P&O Cruises, according to Hitwise figures, has completed the deal to buy German cruise travel agency Kreuzfahrtberater.de, in a transaction totalling €25 million.

The acquisition will result in the company having operations in the two largest cruise markets in Europe and will create a ‘differentiated European leader in a large, growing and fragmented market’, according to chief executive Seamus Conlon.

The new combined company will have cruise sales of about €250 million euros, making it the largest cruise travel agency in Europe.

Its websites, Cruise.co.uk, Cruises.uk, Kreuzfahrtberater.de and Seascanner.com, will have a combined annual traffic of over 37.5 million visits and feature over 260,000 real customer reviews and opinions.

Conlon said: “The cruise market is set for major expansion in the next few years with a total of 65 new ships set to enter the market, including new entrants Virgin and Ritz Carlton, which recently announced plans to launch cruise operations.”

Conlon told Travel Weekly that he planned to integrate the two companies’ IT platforms, saying Kreuzfahrberater had really good online booking technology which Cruise.co.uk could benefit from, while Cruise.co.uk could share its social media technology and know-how, making the two businesses very ‘complimentary’.

Kreuzfahrtberater.de, based in Ahrensburg, was founded 12 years ago by Friedrich Koester, Malte Koester and Andreas Koester-Clobes and today has over 60 staff and is the technology leader in online cruise sales in Germany.

The founders of Kreuzfahrtberater.de will reinvest significantly in the combined business and will remain part of the management team.

Conlon added: “Both companies share a passion for the sector, have great staff and the technology required to deliver great service.

“This transaction allows us to diversify our business by moving into a new large cruising market and represents a major step forward in Cruise.co achieving its strategic aim of becoming the leading pan-European cruise online travel agency.”

Friedrich Koester, founder of Kreuzfahrtberater.de said: “We have chosen Cruise.co.uk and Bridgepoint as partners to drive consolidation in the market and grow our business more strongly.

“Together with our fantastic team we are excited to broaden our product offering and share knowledge with our new UK colleagues.”

The UK ocean cruise market totalled 1.89 million passengers in 2016 and the German market was 2.02 million.

Cruise.co.uk was formed ten years ago when Conlon led a MBO from Carnival Corporation in 2007, when its turnover was £18 million.

Bridgepoint Development Capital subsequently acquired Cruise.co.uk in 2016 in a transaction totalling £52 million, with a view to targeting international expansion.