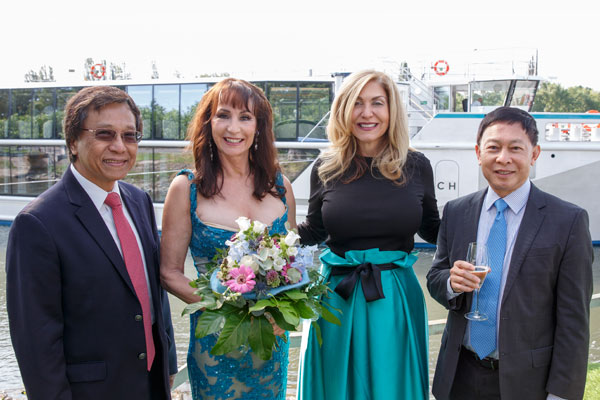 The first new-build vessel to join Crystal River Cruises was named on Sunday.

The all-suite Crystal Bach is the first of four Rhine-class ships due to be introduced by the company.

The christening followed the debut of the company’s custom-designed Boeing 777 in Las Vegas last week.

Crystal Bach joins the refurbished Crystal Mozart, which has been operating for the luxury travel company for more than a year.

The new vessel will run 10- and 14-day voyages predominantly along the Rhine with calls in Belgium, Netherlands, Switzerland and Germany.

Speaking at the naming event in Germany, Crystal president and chief executive Edie Rodriguez said: “The enthusiasm surrounding this groundbreaking ship has been tremendous already, and we could not be prouder to welcome her to the award-winning Crystal River fleet.

“The fact that she is Crystal’s first-ever new build river ship means that we had the opportunity to go beyond the best and create a luxury river cruise experience that is truly unprecedented.

“She is the first – and, until her sisters join her – the only all-balcony, all-suite river ship.”

Tan Sri Lim Kok Thay, chairman and chief executive of Crystal owner Genting Hong Kong, added: “Crystal remains committed to being the standard bearer for what is possible in luxury travel, just as they have since they first embarked more than 27 years ago.

“We are proud to be part of and support this vision, and look forward to continuing on this journey together.”