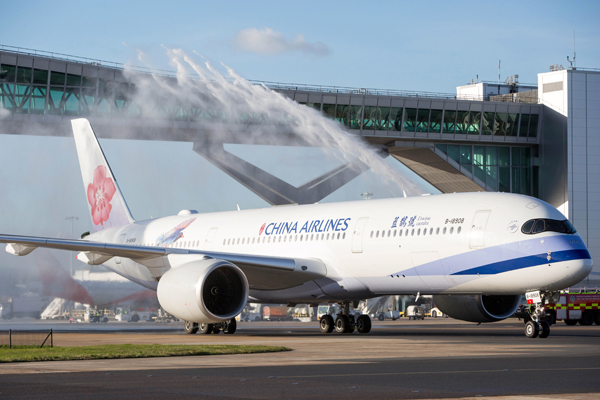 The UK’s only direct flight to Taipei left Gatwick for the first time on Friday.

Other new services to Buenos Aires, Chicago and Austin are due to follow in the new year.

The return of the only direct air link between the UK and Taipei was hailed as boosting trade between the two economies.

China Airlines suspended its service from Heathrow five years ago but as returned by deploying a new Airbus A350-900XWB aircraft from Gatwick.

The carrier’s Europe vice president Roger Han said: “We’re delighted to be back in the UK this year, with the inaugural flight marking the ease of travel between the UK and Taiwan.

“As the only non-stop service between the two countries, we want to highlight to travellers the benefits to travelling to Taipei, for business or leisure purposes.

“In addition, our extensive route network offers destinations throughout Asia and onward to Australia for British travellers to enjoy.”

Gatwick chief commercial officer Guy Stephenson said: “We welcome China Airlines to Gatwick for the launch of this new service that will provide a vital link between the UK and Taiwan at a critical time in our economic history.

“The new route will boost trade between our two enterprising economies and help our businesses to get goods to market as quickly and efficiently as possible.

“The airport is increasingly connecting the UK to more and more long-haul destinations across the globe and our 60-plus long-haul network now includes destinations in China, the Far East, Africa, South America and across the US.”

International trade minister Greg Hands added: “This renewed direct flight between London and Taipei is another vote of confidence in the British economy, and the growing trade links between the UK and Taiwan.

“I know well the huge opportunities Taiwan’s vibrant economy presents to British businesses and this flight will make it even easier for firms looking to satisfy the growing Taiwanese demand for quality British goods and services.”