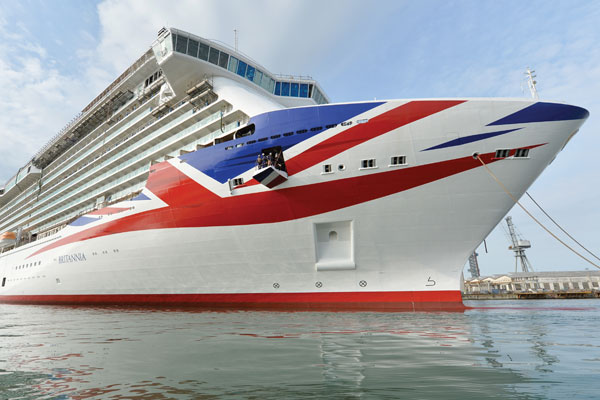 A total of 181 cruises go on general sale on March 21 with a 5% low-deposit offer for passengers booking by April 30.

Full-length cruise prices lead in at £699 per person for 12-nights from Southampton.

The line’s Dubai and Arabian Gulf fly-cruise programme has been expanded to include three 14-night voyages to India, a 12-night Christmas and new year voyage with New Year’s Eve in Dubai, two seven-night itineraries, including one which coincides with February school half term, plus a series of ten-night cruises.

Britannia and Azura will run Caribbean fly-cruises with 14-night itineraries to nine ports, with the programme extended by a week with each ship offering an additional sailing.

In addition to three cruises operated by Aurora and Arcadia in February and March 2020, an extra 12-night Northern Lights cruise has been added in autumn 2019.

Aurora will run a 55-night itinerary in 2020 to the Caribbean as well as New Orleans and Miami.

Arcadia will operate a 99-night world cruise in 2020 including the re-introduction of New Zealand with three calls, an overnight in Shanghai as well as destinations such as Sydney, San Francisco, Hong Kong and Dubai. The ship will make a maiden call into Manzanillo, Mexico, as part of the circumnavigation.

Ventura and Arcadia replace Aurora and Oceana in operating five-night short breaks over new year of 2019-20.

Oriana will operate a sole western Mediterranean cruise within the winter programme. The 17-night itinerary Oriana includes Valencia, Genoa and Rome (from Civitavecchia), plus calls to Gibraltar, Lisbon and Olbia.

Ships across the fleet will run two-night weekend breaks from Southampton to Bruges from Zeebrugge.

Four-night cruise breaks to Amsterdam will be operated by Aurora and Ventura to Amsterdam.

Aurora and Ventura will offer seven-night cruises taking in northern European cities, including overnights in Rotterdam, plus calls to Cherbourg and Bruges from Zeebrugge.