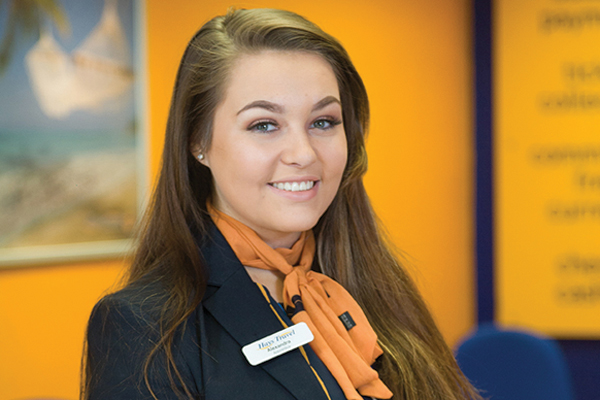 A Hays Travel apprentice who was told she had months to live has been shortlisted for a regional award.

Alexandra Turner-Davis, who works at the agency’s Jarrow branch in Tyne and Wear, beat the odds when doctors diagnosed her with progressive throat cancer in 2014.

The teenager, who turns 19 next week, said her life-and-death battle with cancer had made her “grab every opportunity in life”, including the creation of her own charity foundation Alex’s Angels, which helps families of children with cancer.

Now she is in the running for the apprentice of the year award at The North East Employee of the Year 2018 awards.

She said: “Cancer has made me who I am. I take pride in my work and I throw everything at my job.”

When Alexandra was told she had just three months to live, doctors gave her the option of having her voice box removed or an adult dose of aggressive chemo-radiation five days a week over six weeks, instead of six months, because her cancer was so advanced. She chose the latter and lost two stone in weight, suffered skin burns, daily sickness and was bedridden – but was given the all-clear in January 2015.

Since then, Alexandra has completed GCSEs in maths and English and landed an apprenticeship at Hays, while Alex’s Angels has raised £53,000 for the Teenage Cancer Trust.

She is now one of the top three apprentices at Hays Travel in terms of sales and is a Hays Travel Apprentice Ambassador.
Other Hays staff shortlisted for the June 1 awards are Faye Robinson, of Hays’ Middlesbrough store, up for apprentice of the year; Hays Travel’s Jarrow branch, for team of the year; and Debbie Howe, manager of the South Shields branch, for the making a difference in the community award.