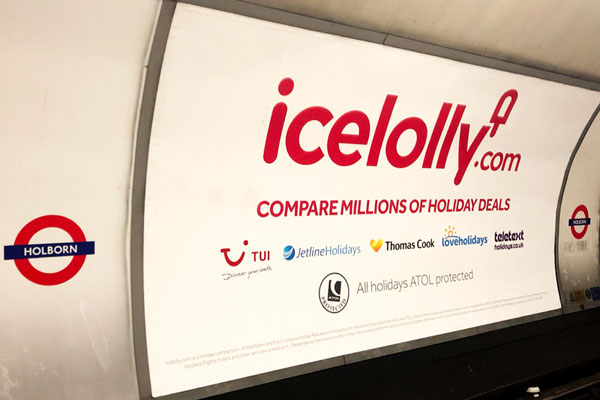 London and the south-east are being targeted with a summer marketing push by icelolly.com.

The company is advertising on the London Underground for the first time from this week with billboards at 18 stations.

A fleet of lorries on roads including the M25 have been carrying icelolly’s colours, logo, beach ball graphics and the names of some of the firm’s most popular holiday search destinations.

The vehicles give more than 55,000 opportunities to be seen a day, according to Department for Transport data.

Branded coffee cups in independent coffee houses in the capital have also been introduced.

The initiative is designed to raise the profile of the metasearch and holiday price comparison site with a focus on helping consumers save time and money.

The campaign builds on multi-platform marketing initiatives since the turn of the year, including a partnership with McDonald’s for its popular Monopoly prize-winning game, regional weather report sponsorship across Capital Radio stations, TV sponsorships and online and social media-driven activities such as the #ShutTheCupUp World Cup competition.

“This series of activities marks a prolonged period of advertising specifically to an audience in the south-east, which is a core target market for our business.

“Our ambition is to become the most recognisable holiday price comparison website in the UK, and we’re confident that this London focussed campaign is a further step towards achieving that.”