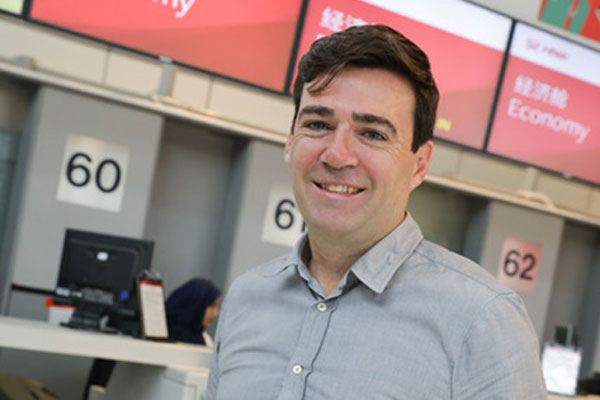 A Manchester-Beijing air route has grown faster than any other UK-China service that has been in operation for more than 12 months, according to new research released today.

Levels of growth in trade, tourism and knowledge exchange between the North of England and the Far East are outstripping national averages.

This is being driven by two years of direct flights between Manchester airport and Beijing.

An independent study unveiled at the British embassy in Beijing by Greater Manchester mayor Andy Burnham shows a 38% rise in the number of Chinese visitors to the North since 2016 – a growth rate higher than both London and the UK average of 30%.

He said: “All parts of the North are benefiting from the economic, social and cultural connections that have forged as a result of the region’s first ever direct service to mainland China launching two years ago.

“We’ve really seen the success of the first route to China from Manchester airport, so we hope to see more being added in the future.”

China’s president Xi announced the Manchester-Beijing route, with Hainan Airlines, during a state visit to the UK in October 2015, with flights starting in June 2016.

Manchester airport chief executive Andrew Cowan said: “This is important research because it demonstrates the power of direct connectivity to fast-growing economies like China.

“While people could always travel to China by transferring at other airports, we were clear in our minds that securing a non-stop service would unlock a wide range of benefits for our city and the wider north.”