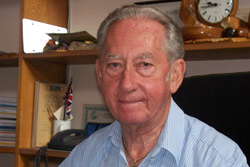 For many travel agents, the internet has proved to be a curse, as con-sumers go direct to suppliers and operators. However, for Can-Am Travel owner Alan Hubbard, the march online has proved to be a bit of a boon, as it has left many of his customers behind.

“Our customers are still getting used to the web. We’re probably 10 years behind everyone else, and a lot of our clients haven’t even got the internet,” he said. “They come to us for that personal service, and they’re shocked when we tell them we can check-in online for them.”

Hubbard, who runs the most easterly travel agency in the Great Britain, on the Suffolk coast, finds there is a limited number of people to sell to. “The problem we have is that on one side of us, to the east, all we have is the North Sea.”

Hubbard’s problems are compounded by the fact that Lowestoft is ringed by the bigger towns of Great Yarmouth, Norwich and Ipswich, which can tempt away all but the closest consumers. He said: “People who live more than 15 miles away tend to go to another agency.”

Despite these challenges, Hubbard has continued to overcome them, and is running the same shop, which opened in 1964. At its peak in 1984, the business comprised five shops in the region, employing 23 staff. In 1992, Hubbard closed two branches, and a further two were closed in 1995, leaving only the original shop.

He said: “It was during a period when the rents went up and all the big agencies were opening in the area, we pulled out of the other branches to concentrate on the core of our business.”

At the same time, Hubbard was running a tour operator, All Canada Travel and Holidays, which he sold to Hoseasons in 1998 He said: “It was all tailor-made for clients, and although it was not large numbers, it was keeping us going.”

Now employing six staff with a turnover of more than £1 million, the business is continuing, with both Norwich airport departure breaks and transfers being core product for customers. However, like many agents, Hubbard has despaired of the culture of discounting that has crept into the industry. “I think we undersell ourselves.

“The word cheap has come into the holiday business and that’s what’s ruining it. We work with the closest margins in any industry, yet all we have are the national newspapers telling the public to look for bargains.

“I think we’ve made a rod for our own backs, as we tell everyone to look for bargains while they think we’re making lots of money because we take thousands of pounds from them in payment.” But whatever happens, Hubbard admits there’s nowhere else he’d rather be working. “It is a part of my life. I’m positive about the industry and I still get a kick out of it.”