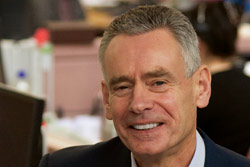 Hoseasons’ pre-tax profits for the year ending October 31, 2008, have risen by almost £1 million as domestic breaks continue to prove popular during the recession.

Chief executive Richard Carrick said the hike in profits was a reflection of a major business restructure, and was despite the fact around £1 million was ploughed back into the company in the last financial year to pay for web technology and new product.

“It was one of the most difficult restructuring processes we have ever undergone,” he added.

The figures were also a result of strong sales of upmarket park lodge accommodation and new city-break apartments, said Carrick, who revealed plans to triple the city apartment programme by early next year and move the product into Europe for the first time. The apartments were proving particularly popular with families and groups, as they provided good value self-catering city accommodation not offered by hotels, he added.

He added: “I would be disappointed if we do not see similar [annual] figures for this year.”
Since Easter, the operator has started selling 2010 capacity early in order to provide more accommodation for this summer. The operator has added around 10% more capacity in cottages and lodges for next year.

Carrick said bringing on 2010 capacity on sale early had been necessary to avoid selling out. He added: “We are not completely sold out. We anticipate the whole of July and August will be. Bookings are still coming in late.”

Unemployment remained the biggest factor in holidaymakers putting off holiday bookings, he added. But already around 20% of Hoseason’s customers are new to the operator this year as a result of the popularity of the UK this year. “We are in the right place at the right time. We have to make sure they come back to us next year,” said Carrick.

Meanwhile, sales of European holidays have recovered from around 30% down before Christmas to around 17% down.

Recent articles on the domestic market