Spain’s Canary islands are the most popular destinations for European holidaymakers booking winter sun breaks, according to Tui.

The operator’s 2018 winter season Holiday Atlas shows that Tenerife is the favourite for Brits, the Irish and Belgians, while Gran Canaria is favoured by the Finns, Danes, Norwegians and Swedes.

Fuerteventura is the favourite for Germans and the French tend to head for Lanzarote.

Meanwhile, Austrians, Dutch and the Swiss venture further afield to long-haul locations such as Malé in the Maldives, Phuket in Thailand and the Antilles island of Curacao. Other long-haul destinations are popular too, such as Jamaica and Mexico.

However, mid-haul destinations remain the most popular for Europeans seeking winter sunshine.

While the Canaries are top of the table, Cape Verde, Egypt and Turkey also rank strongly.

The top five destinations for Tui customers from the UK and Ireland are: Tenerife, Lanzarote, Cancun, Gran Canaria and Benidorm.

Across the range of Tui’s winter sun destinations, Spain is the favourite, followed by Egypt in second place, then Thailand, Cape Verde and Mexico. 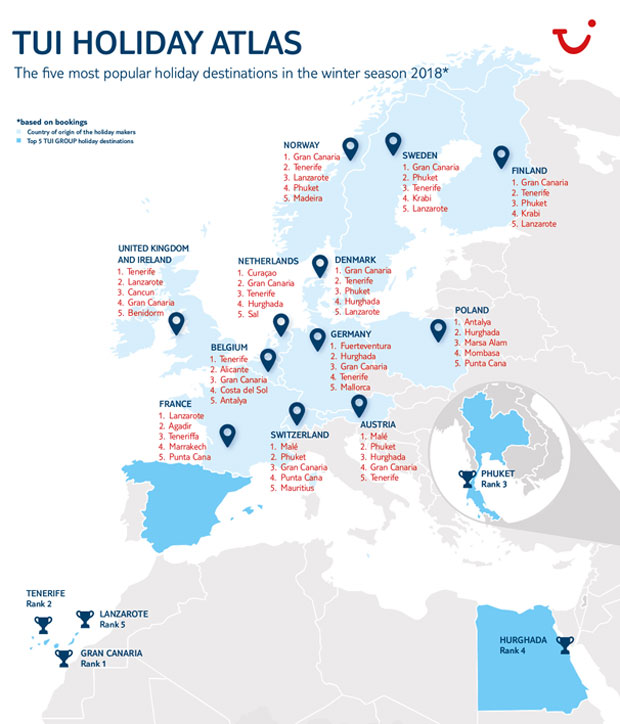 Titan Travel confirms ‘trade is part of our recovery’