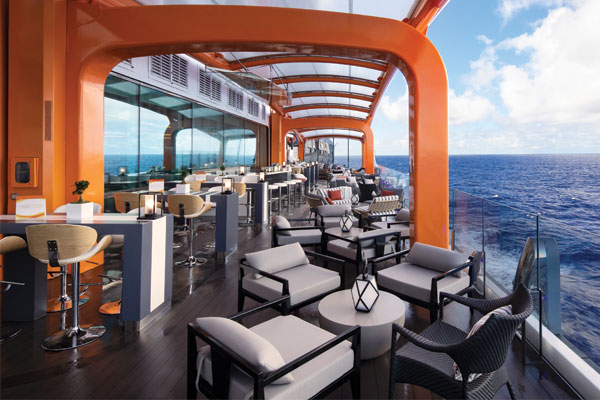 Jane Archer tests out two of the latest ships to hit the high seas.

There are several theories as to how Celebrity Edge got its name. Was it the ‘edgy’ decor? The cutting-edge design? Or – as I wondered when stepping onto the Magic Carpet while it doubled as a tender platform – is it because you can enjoy a drink literally at the ‘edge’ of the ocean?

The Magic Carpet is a cantilevered platform the size of a tennis court that was originally conceived as a faster and more comfortable way to get passengers from the ship into a tender boat.

Tenders are the vessels used to get people ashore in smaller ports, which can be a slow process at the best of times, and challenging for older passengers and those with mobility problems.

“At its highest point, it becomes a speciality restaurant where up to 75 people can have Dinner on the Edge.”

In its tender platform mode, the Magic Carpet aligns with the ‘destination gateway’ lounge, a spacious room also used for port talks and presentations, where passengers are swiped out, go down a few fixed steps (there is also a chairlift) and board their tender. Then, once the rush to get ashore is over, the bar opens and the Magic Carpet becomes an oceanside lounge.

As the platform ‘sits’ on the water, architects had to find a way to raise it while the ship was sailing. Initially the plan was to move it up to deck five, but then the question was asked: if it can go to deck five, why not higher?

Back at the drawing board, designers found a way for it to ‘fly’ right up to deck 16, changing function as it goes. At its highest point, it becomes a speciality restaurant where up to 75 people can have Dinner on the Edge.

Its bright orange gantry isn’t particularly attractive from the outside, but for those on board, it is pure genius. 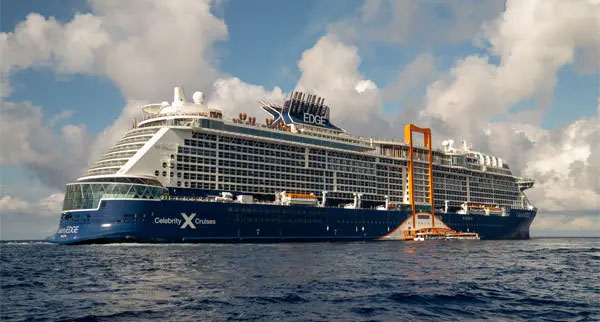 It’s also just one of many aspects of traditional ship design turned upside down on Celebrity Edge to create a fresh look sure to catch the eye of the cruising-is-not-for-me generation.

The ship’s hot tubs balance on impossibly high martini glass-shaped stems that offer incomparable sea views as you soak; lounge-cum-restaurant Eden does away with stairs in favour of a three-storey spiral walkway; and a sloping jogging track links the top two decks. There’s substance as well as style, with tree sculptures and real shrubs acting as windbreaks and sun shades in the stunning-yet-practical Rooftop Garden.

In one of the biggest transformations, conventional balconies have been replaced with what Celebrity calls ‘infinite balconies’, which have a balcony inside the cabin and floor-to-ceiling windows that open horizontally with the touch of a button. While some passengers I spoke to said they preferred being able to sit outside on traditional balconies, I liked the combination of fresh air with more usable space inside the cabin. 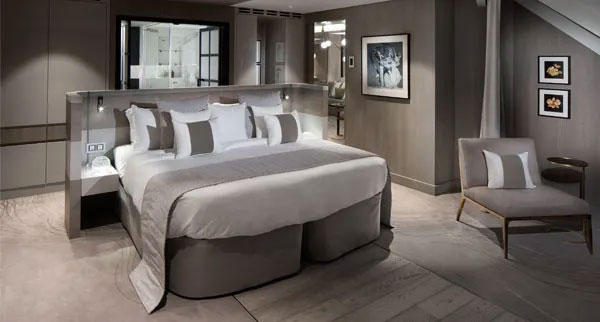 Suites, which make up 12% of the accommodation on Edge, still have sit-out balconies along with access to The Retreat, an exclusive spot with a lounge, bar, sundeck and pool reserved for suite passengers.

Categories include six two‑storey villas with plunge pools on the balcony, two two‑bedroom Penthouse Suites, and two Iconic Suites – the best rooms in the house – which sit above the bridge with uninterrupted views of the horizon.

“‘Infinite balconies’ have a balcony inside the cabin and floor-to-ceiling windows that open horizontally with the touch of a button.”

Jo Rzymowska, Celebrity’s vice-president and managing director for the UK, Ireland and Asia, says suites are selling faster than other cabin categories, which she attributes to designer Kelly Hoppen, who has given even the lowliest accommodation a sleek, modernistic look and feel.

“Kelly has spoken to our target market of affluent customers who have an appreciation of design, and also attracted those who have yet to cruise,” she says. “For us, it’s less about millennials, more about attitude.” 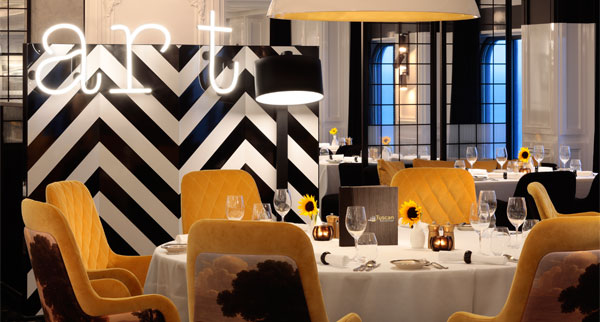 Dining has not been left out of the Edge revolution. Instead of a main dining room, there are four complimentary restaurants. Each serves the same menu but with its own decor and choice of speciality dishes – Italian in Tuscan, French in Normandie, American in Cosmopolitan and Mediterranean in Cyprus.

Passengers can choose select dining and eat when and in whichever restaurant they fancy; bookings can be made in advance or they can just turn up and wait for a table. Otherwise they can opt for traditional fixed dining and eat in the same restaurant at the same time and table each evening.

“There are four complimentary restaurants, each serving the same menu but with its own decor and choice of speciality dishes.”

The choice of paid-for dining venues includes steakhouse and seafood restaurants and the superb Le Grand Bistro, where $55 buys a four-course dinner and animation show where 3D ‘petit chefs’ prepare each dish on plates in front of diners’ eyes.

Baffled? Yet another reason why everyone needs to discover life on the Edge. 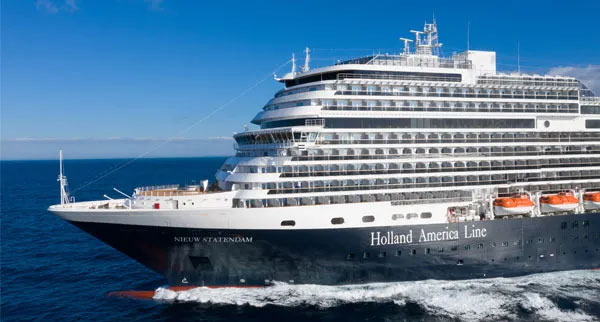 Never judge a book by its cover, I tell myself, as I report for dinner at Sel de Mer, a restaurant on Holland America Line’s new ship Nieuw Statendam.

The evening doesn’t look promising for me, since the name implies fish – as does the ‘catch of the day’ ice cabinet outside – which is not my favourite fare.

“Sel de Mer might look and sound like a seafood restaurant but it is actually an authentic French brasserie.”

Thankfully though, the old adage is right. Sel de Mer might look and sound like a seafood restaurant but it is actually an authentic French brasserie with the likes of foie gras, cassoulet and steak frites on the menu alongside the bouillabaisse fish stew and seafood platters.

‘Authentic’ is the buzzword on Nieuw Statendam, which is all about delivering the real deal to passengers when it comes to the food, art and entertainment on board, as well as in the destinations they’ll visit. 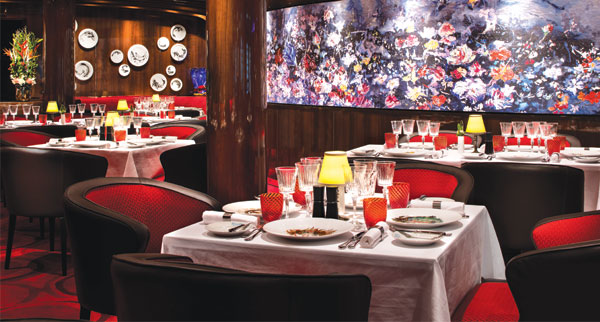 The menu in Canaletto’s has a definite Italian twist (though I’m still not convinced about the curry, even if it was dubbed Cipriani-style), plus there’s a Dutch cafe serving broodje kroket (fried veal ragout) and uitsmijter (Gouda cheese, ham and eggs).

In the Music Walk, a concept Holland America introduced on sister ship Koningsdam a couple of years ago, passengers can hear pop favourites and rhythm and blues played live by musicians vetted by top entertainment brands Billboard and BB King.

“In the Music Walk passengers can hear pop favourites and rhythm and blues played live by musicians.”

There’s a classical string quartet courtesy of a partnership with the Lincoln Center for the Performing Arts in New York, and a new Rock Room with live bands approved by Rolling Stone magazine.

“I want Holland America to offer the best live music at sea,” says president Orlando Ashford, who has rejuvenated the line since taking the helm four years ago. 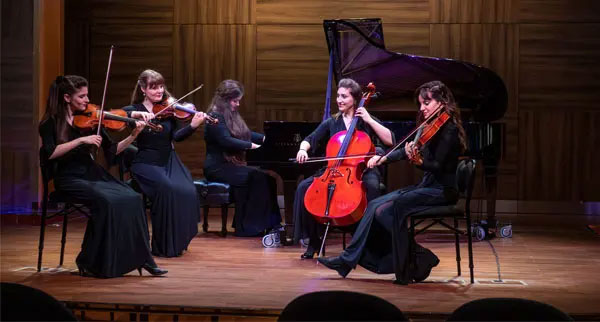 Nieuw Statendam is a tad bigger than Koningsdam (2,666 vs 2,650 passengers) and almost identical in look and feel, but with a few tweaks to enhance or improve the offering.

The Rock Room adds a new genre of music, while Club Orange, a new, more intimate breakfast and dinner venue for suite passengers, has replaced a less popular farm-to-table restaurant on Koningsdam.

In the Lido, new call buttons for passengers to hail bar staff have improved service, though there is still room for improvement in other areas.

In Explorations Central, guests can listen to destination talks hosted by ‘EXC guides’ and use interactive maps to decide what to see and do in the places they are visiting.

“There is the six-foot replica of Michelangelo’s David sculpted out of clear resin and portraying the naked hero holding an iPhone.”

That’s the authentic mantra again, with the guides supposedly on hand to inform rather than hard-sell the shore excursions. “We want guests to follow their own interests ashore, whether that be history, food or art,” says Ashford.

Not that you have to go ashore to get an art fix, as works valued at around $4 million adorn the ship. A 7.5-ton harp sculpture fills the atrium, walls are hung with paintings that imitate the works of Dutch masters, and in Asian restaurant Tamarind, precious Chinese jewellery is stashed away in a glass cabinet.

And then there is the six-foot replica of Michelangelo’s David sculpted out of clear resin and portraying the naked hero holding an iPhone. Authentic? Not at all. Selfie heaven? You bet!

Ship architect Tom Wright used 3D technology to ‘walk’ through plans over and over until they were just right.

Tried and tested: We step on board Sky Princess
Cruise ship review: Spirit of Discovery, Saga Cruises
Top picks for cruises in the Med this summer