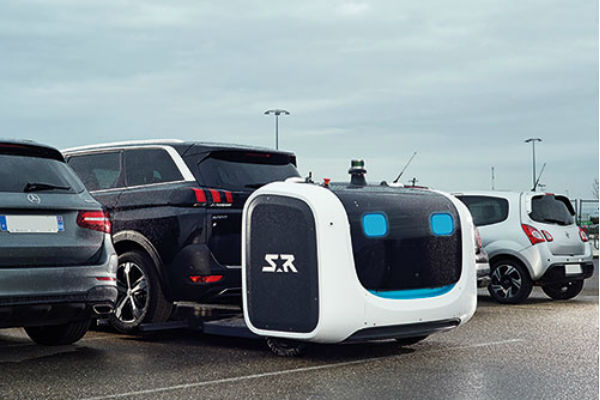 Valet parking robots is to be tested at Gatwick this summer.

Travellers in the trial from August will drop they car off at a dedicated zone and call for a droid booked from an app on a touch screen.

As passengers are shuttled to the terminal, the battery-powered robot slides a forklift-style ramp under the car chassis, and uses military-grade GPS to ferry it to a secure bay, without needing the keys.

The autonomous droids — codenamed Stan and likened to a robot in Pixar’s 2008 movie Wall-E — scan each vehicle’s size and shape to safely steer them to their destination.

Because there is no need for the driver’s door to open, they can be parked more tightly together.

Each booking is linked to the passenger’s flight number to ensure their car is ready to collect from the same location upon their return.

The three-month pilot scheme, revealed in a planning application to Crawley council, is proposed to begin at the height of the summer getaway using technology developed by French firm Stanley Robotics, the Evening Standard in London reported.

Gatwick’s trial will take place in part of the South Terminal’s long-stay car park, where lamp posts and 170 spaces will be removed to make way for 270 spots, and a robot-friendly surface laid.

Similar systems are being trialled at airports in Paris, Lyon and Düsseldorf.

Stanley Robotics co-founder Stephane Evanno said: “We call it a valet parking robot because people just need to drop off their car at the entrance of the car park and then they can basically leave and catch a flight, but it’s doing more than just valet parking.”

He said that passenger feedback was “overwhelmingly good” during a five-month trial at Paris Charles de Gaulle last year, where the system operated so seamlessly that some customers were not even aware a robot had been involved.

“They did not understand that their car would not stay in that wide space where they left it … they were just wondering why the car was in another position when they returned,” he told industry website Airport Technology.