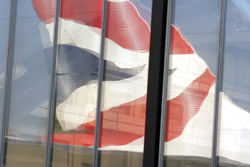 The boards of British Airways and Iberia have agreed the basis of a proposed merger which is expected to be completed in 2010.

After months of talks, a memorandum of understanding has been signed setting out the basis for the deal.

British Airways will have 55% and Iberia 45% of the shares of the new company, which will be registered in Madrid for tax purposes. The operating and financial headquarters of the group will be based in London.

The new group would have 419 aircraft and fly to 205 destinations.

BA chief executive Willie Walsh, who will become group chief executive, said: “The merger will create a strong European airline well able to compete in the 21st century. Both airlines will retain their brands and heritage while achieving significant synergies as a combined force.”

More on the BA-Iberia merger

This is a feed from Google News