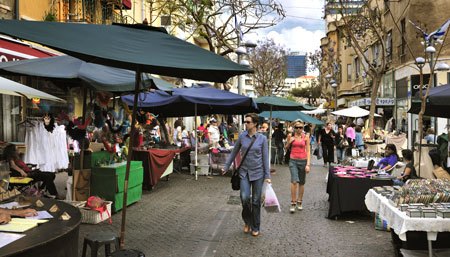 The pioneers who founded Tel Aviv 100 years ago envisaged a truly modern city – and they would be satisfied with the result. Today, Tel Aviv is arguably the most forward-looking and culturally vibrant metropolis in the Middle East.

The city is best known for its nightlife and beach culture, and as well as its vibrant art, fashion and architectural scene. But in the last 20 years, a diverse culinary offering has also emerged and getting there just keeps becoming easier.

EasyJet began flying to Tel Aviv from Luton six times a week earlier this month, with prices from £72 one way.

Here’s how to sample the best of the city in 48 hours.

8am: Enjoy a lazy start to the day with breakfast at Manta Ray. With a prime location right on the Alma beach, it is best known for seafood, but also has a wide choice of breakfast dishes served up with freshly-baked Balkan bread. Grab a table on the terrace before the heat of day sets in.

10am: Immerse yourself in the real Tel Aviv at the frenetic Carmel market, at the junction of Allenby Street and King George Street. Let yourself get lost in the sights, smells and sounds as locals vie for the best deals on everything from spices to suncream.

11am: Spend your shekels at Nachalat Binyamin, a pedestrianised side street where local artisans sell art, crafts and jewellery. After that, head up Shenkin Street and explore the trendy boutiques and art shops.

1pm: For lunch, it has to be the Carmella Bistro. This local institution next to Carmel market has recently opened a beer garden, which makes its tasty mezze or fresh fish dishes even more tempting.

3pm: Slow the pace after lunch and head to Tel Aviv’s bohemian neighbourhood Neve Tzedek. Founded in 1887 by Aharon Shlush, this is Tel Aviv’s first Jewish neighbourhood and many of its turn-of-the-century homes can still be seen. Wander through the charming streets and visit the Nachum Gutman museum, a small art museum with plenty of character.

5pm: Stop to refuel at Tazza D’Oro, a Neve Tzedek institution famous for its coffee, which is as good as its Italian namesake.

8pm: Dine with the beautiful people at Herbert Samuel. A fairly new addition to the Tel Aviv restaurant scene, the imaginative Mediterranean food with Israeli touches is already attracting a young and trendy crowd.

11pm: Round off the day with a cocktail at Sublet, an open-air bar on the roof of the Gaon office building.

8am: Take a walk up the city’s main thoroughfare, Dizengoff Street, to Atnachta. Owned by a couple from Jerusalem, this unassuming cafe serves up omelettes and delicious flatbreads baked in its brick oven.

10am: Take a step back in time and head over to Old Jaffa. With a quieter vibe than Tel Aviv, this town is rich with the history of the many cultures who reigned there over the centuries. Each of them – Muslim, Greek, British or French – has left its mark. Starting from the clocktower, meander through the narrow streets and winding alleyways.

11am: In among the alleys, which are named after signs of the zodiac, you will come across art galleries and shops selling Judaica, jewellery and crafts. The most noteworthy of the art galleries is the Ilana Goor Museum, where the Tiberias-born artist both lives and displays her sculpture, furniture and jewellery collections.

1pm: The dish shakshuka is a delicious combination of eggs, tomato, spices and peppers. Originally North African, shakshuka has become a staple of Israeli cuisine and there’s nowhere better to sample it than Dr Shakshuka in Old Jaffa. Chef Bino Gabso oversees the cacophonous kitchen at this rustic restaurant in a converted warehouse and courtyard. Don’t miss the shakshuka with merguez sausage and fish hraymi in spicy sauce.

3pm: Walk off your lunch with a stroll round Jaffa’s labyrinthine flea market. The market has been operating since the 19th century, when Jaffa was a lively port city. A rummage through the mix of antiques, second-hand clothes and bric-a-brac could unearth some serious bargains – as long as you are prepared to haggle.

4pm: Head back into Tel Aviv to the Eretz Israel Museum. To commemorate 100 years of the city, the museum is running an exhibition called White City, Dark Days, which is a photographic journey through its troubled history. Evocative black-and- white photographs recalling disasters from floods to bombings serve as a reminder that there is more to Tel Aviv than the laid-back, party city.

8pm: Indulge at Bellini, a buzzy Italian restaurant in Neve Tzedek in the Suzanne Dellal Dance Centre. Take a seat on the terrace, tuck into a plate of vitello alla mediterranea and raise a glass to 100 years of Tel Aviv.

Longwood Holidays offers three nights at the three-star Cinema Hotel starting from £579 per person, bed and breakfast. This includes return flights with BMI from Heathrow and transfers. The same package with accommodation at the five-star Dan Tel Aviv costs from £689 per person, based on two sharing. longwoodholidays.co.uk, 020 8418 2550

Isango offers a one-day tour to Jerusalem from Tel Aviv. Highlights include the Mount of Olives, the four quarters of the Old City and the site of the crucifixion, starting from £47.

The Tourism Association runs a walking tour of Old Jaffa every Wednesday at 9.30am, starting from the Jaffa Clock Tower at Yefet Street. It also offers a night walking tour starting from Rothschild Boulevard every Tuesday at 8pm.