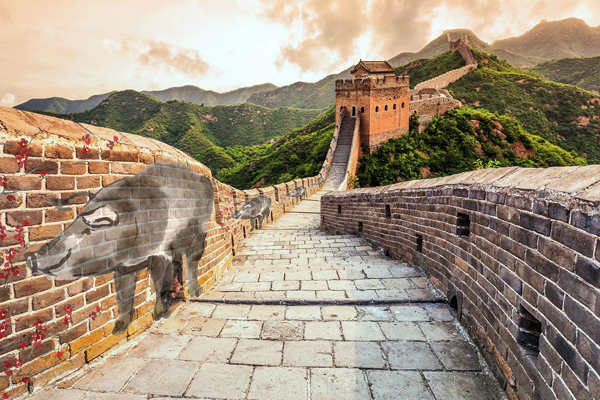 A mysterious Chinese street artist has been commissioned by Wendy Wu Tours to design a series of pig murals along an entire section of The Great Wall of China near Beijing in what is being claimed as a world first.

The specialist operator was first asked by the Chinese government to commission the work at the end of 2018 for completion early 2019, coinciding with the Chinese Year of the Pig.

Company founder Wendy Wu, said: “It was a great honour to be asked by the Chinese Government to decorate a section of the Wall.

“The difficulty was finding an artist who could do the work to a very tight deadline, April 1, 2019, however we prevailed and found the perfect street artist with the vision to actualise exactly what we were looking for.”

Given the success of these paintings Wendy Wu will be scouting for a new artist to carry out the work in 2020 for the Year of the Rat.

Meanwhile, Travel Weekly has discovered that water-skiing and paragliding from the back Emerald Waterways’  river vessels are to be introduced.

A revolutionary ‘turbo-boost’ button equipped on all of the river cruise line’s luxury Star-Ships will enable the high-speed activities to be offered from today.

When high-speed sailing takes place, the company will shift the timings of its on-deck yoga, to ensure passegers’ shavasna is not disturbed.

Emerald Waterways European excitement director Olaf Prilo explained how the company had opted to upgrade the engines of its fleet this winter with nitrous oxide injection – similar to the system used in cars by street racers.

“Forget cruising sedately. Emerald Waterways is going to expand its reach and cater to those who feel the ‘need for speed’. Our new ‘boost’ button fires these Star-Ships up the river like a speedboat. Whether you are having a go at the water-skiing experience or just standing on deck, we are guaranteeing to get our guests’ hearts racing.”

Prilo said the water-skiing and paragliding sessions would take part in the centre of selected European cities following protracted negotiations with local authorities across the continent.

“Some loved the idea and agreed to our plans straight away, but there were some who turned it down. They couldn’t believe we’d proposed something so crazy.”

An aerial gondola is planned for Scotland’s capital, running from Apex Hotels’ Grassmarket property straight into Edinburgh Castle’s Esplanade at the top of the Royal Mile.

A feasibility study is underway for the ‘Apex Grasshopper’ project, which would see up to eight, four-person gondolas make the 200 meter return trip from the roof of the Apex Grassmarket Hotel to the World Heritage Site and back again in under ten minutes.

Project manager Poppy Cox said: “We pride ourselves in going the extra mile for our guests and this is the perfect example – no other Scottish hotel will boast a link directly from its rooftop to one of the world’s most iconic tourist attractions.”

The hotel group is working in partnership with ISA Architects on its vision for the ambitious project – today revealing the first images of how the transport link will look.

Ian Springford, director of ISA Architects, said: “If given the go ahead, we’re confident we can deliver this project quicker and cheaper than the tram extension and our ambition is to see the project come to fruition by 1 April 2021.”

Following private space travel firm SpaceXs launch of Starship flights to Mars, Faremine claims to have eclipsed competitors by being the first scheduled Starship specialist to announce fares as low as $100,000 are now available to book.

The breathtaking beaches of Borealis Basin are simply out of this world and Mars is set to be travel’s coolest new destination.

“Agents and tour operators are urged to book before midday as sales are expected to rocket,” the company said.

A space travel mini-brochure with a range of packages incorporating, flights, ground arrangements, on-planet touring and off-world experiences, is due to be released from the start of April.

Pria Fulgent, senior product manager for off-world touring and expedition, said: “Developing a suite of space-based holiday products is a natural progression in our mission to seek out new holidays and new experiences, to boldly take British holidaymakers where they have never gone before.”

Royal Caribbean International is also taking to the skies for the first time with a dedicated aircraft called Master of the Skies from 2022.

The first ‘Cloud-class’ aircraft will offer passengers the chance to enjoy many of the hallmarks of Royal Caribbean’s cruises at 35,000ft.

Along a similar theme, Virgin Voyages disclosed that passengers staying in RockStar Suites on the start-up line’s second ship in 2021 will have the ability to arrive and depart via private jet transfer.

“From the sky to the sea, our RockStar Suite Sailors will truly live the glamorous life of a rockstar icon from the moment they begin their holiday. Why walk aboard the ship when you can fly,” said president and CEO Tom McAlpin.

A new ‘EuropcarVoice’ is being installed in selected vehicles for a limited period enabling drivers who put their vocal prowess to the test to win a discount off their rental.

The Voice0104 system has been installed into a selection of  rental vehicles, with discreetly fitted microphones.

With more than 10,000 songs to choose from, renters can belt out a rendition of their favourite tracks.

The choice of song settings range from ‘Solo Artist’ – perfect for closet Adele fans – to ‘Guilty Pleasures’ – for ABBA enthusiasts – to ‘Girl or Boy Band’ because what is a road trip without a little Take That? A ‘Family Frenzy’ setting which allows family members to harmonise their favourite tracks.

The a limited pilot will just be available until midday today.

Gary Smith, managing director, Europcar Mobility Group UK said: “We’re all partial to singing along to the radio on long journeys. Now we’ve made it easy for the whole car to get involved in a good sing-along – and potentially earn discounts.”

A range of savoury sorbets have been unveiled today by holiday comparison and deals site Icelolly.com to give customers a taste of favourite destinations.