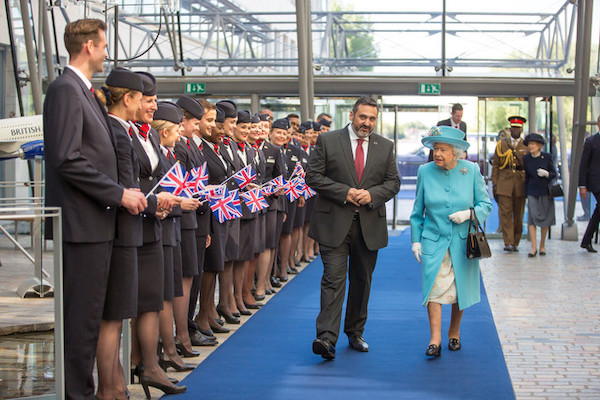 She met staff wearing heritage BA uniforms and visited BA’s museum, The Speedbird Centre, to see artefacts and memorabilia about her journeys with the airline throughout her reign.

These included images from 1951 when the-then Princess Elizabeth and Duke of Edinburgh made their first transatlantic flight from London to Montreal with BA’s predecessor, BOAC, as well as a photo from her first Commonwealth tour in 1953.

Models of aircraft on which the royal family have flown lined The Speedbird Centre route, along with items from royal flights such as the royal book, signed by the Queen, the Queen Mother, Prince Philip and the Prince of Wales.

She also met members of the airline’s Community Investment team and staff who raise money for Flying Start, BA’s charity partnership with Comic Relief – which has so far raised more than £20 million.

Other staff she met included those representing accessibility networks and winners from the airline’s Above and Beyond recognition scheme, which rewards those “who’ve gone the extra mile for customers”.

Alex Cruz, BA chairman and chief executive, said: “It was such a pleasure to show Her Majesty The Queen the artefacts and memorabilia we have kept and curated over the years, and to introduce her to our passionate teams from all across British Airways who’ve gone above and beyond for customers, to those who make British Airways the inclusive place it is to work, and those who help raise millions for young people in need.

“This is the absolute highlight of our centenary year celebrations and something we will all remember for many years to come.”