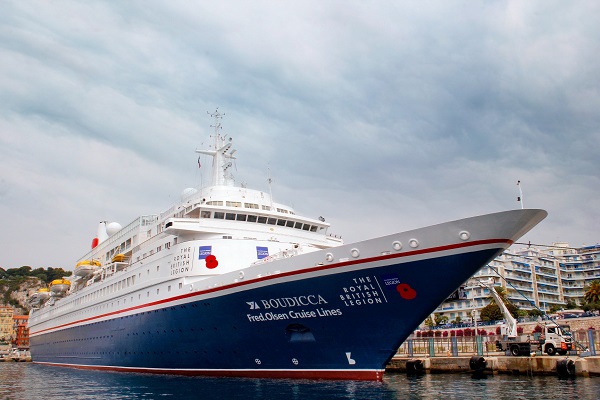 The seven-night D-Day 75 Voyage of Remembrance sailing, put together for the Royal British Legion, departed Dover on Sunday.

It was chartered by Suffolk-based tour operator Arena Travel, which is the official travel partner for the Legion.

From the White Cliffs of Dover, Boudicca sailed to the coast of Normandy, France, where the veterans will attend a series of commemorative events to mark the 75th anniversary of the Normandy Landings, fought on the five beaches of ‘Gold’, ‘Sword’, ‘Juno’, ‘Omaha’ and ‘Utah’, on June 6, 1944.

The ship’s exterior has been decorated with The Royal British Legion’s red poppy insignia, including on the bow, stern and deckhouse.

Peter Deer, commercial director at Fred. Olsen Cruise Lines, said: “We are very proud that our cruise ship, Boudicca, will be following the same path as the ships involved on this momentous day, which brought peace and reconciliation to mark the Second World War.”

Declan Treanor, chairman of Arena Travel Group, said: “In the six years since we have working with the Royal British Legion the Voyage of Remembrance is our most ambitious project to date. As a relatively small, specialist operator, we are enormously proud to have been selected to work with the Royal British Legion on this and their other tours and be associated with the work they do to support our veterans.”

Bob Gamble, The Royal British Legion’s assistant director for commemorative events, said: “Seventy five years ago, the largest seaborne invasion force in history set sail for France on a mission to liberate Europe. Alongside their American cousins, nearly 160,000 men from Britain and the Commonwealth landed on the beaches of Normandy.

“Today, we stand in awe of their achievement and salute their bravery and sacrifice, on our journey back to Normandy.”

On Sunday, Dover’s cruise terminal was decked out with flags and bunting while there was a display of military vehicles from the era and the Dover Sea Cadets marched and performed wartime songs.

The Royal British Legion’s ‘D-Day 75 Voyage of Remembrance’ has been offered free of charge to D-Day veterans and their companions, funded by the UK Government’s LIBOR grant, in conjunction with the Ministry of Defence.