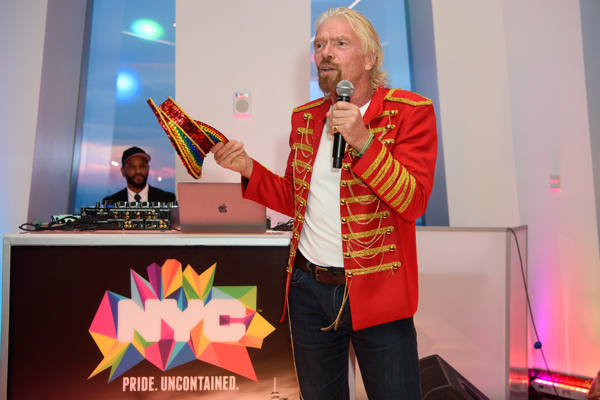 Sir Richard Branson has urged travel companies to embrace diversity within their workforces and called for patience with companies starting to do more to cater for minority groups.

Speaking in Manhattan after Virgin Atlantic’s inaugural Pride Flight from Heathrow to New York, Sir Richard defended companies which “end up making money out of the gay community” as long as they “genuinely embrace it”.

He said it was important that firms championed diversity and equality among their employees, which he said would then allow workforces to drive a culture-shift from within.

“It’s critical that people who run companies need to embrace minority groups, and women, who have been treated like a minority group, and try and move their companies towards equality,” he said. “Embrace ethnicity and make sure they [workforces] have got at least the right percentage of people from different countries. Embrace the gay community and treat all these groups in the humane way you would treat your brothers and sisters and children.”

When asked about the business case for chasing the ‘purple pound’ or ‘pink dollar’, he added: “It’s got to come from the heart. They [companies] need to not worry about reputational damage. It’s quite the reverse. If companies then end up making money out of the gay community, having genuinely embraced it, that’s fine.”

But he added: “I wouldn’t go out of your way to criticise companies who have started on that process. At the moment, if a company comes out and supports the gay community, and initially one feels that at their heart they haven’t embraced it as much a they should, at least they’ve started the process – and the people who work for those companies will then force them to be real.

“Every year things are moving in the right direction in America and Europe, but certainly not in other countries.”

With New York hosting WorldPride celebrations 50 years on from the Stonewall Uprising in the city, considered the beginning of the modern LGBTQ+ rights movement, he recalled marching against the Vietnam War on the same day in 1969.

Speaking to the party’s 150 guests, he said not enough had been done to prevent the Iraq war in the early 2000s and called for demonstrations if recent tensions between the US and Iran escalate into a full-blown military conflict.