Agents have been urged to grasp the “unique” opportunity to book the final few cabins available on discovery yacht Scenic Eclipse’s maiden programme.

A group of agents was given a first glimpse of the 228-passenger vessel in Rotterdam last weekend.

The line kept some furnishings under wraps to “keep everything pristine” for passengers sailing on the ship’s inaugural sailing from Reykjavik.

Delivery of the vessel – billed as the world’s first discovery yacht – had been delayed three times as the Croatian shipyard where it was built battled financial challenges.

Scenic’s UK director of sales, Joseph Grimley, said: “The delays may have put people off a bit, but once that maiden voyage happens, people will be queueing up.”

New itineraries for 2020, 2021 and 2022 went on sale on Monday and Grimley urged agents to book early “to secure their first choice of suite and itinerary at the best price”.

The ship’s debut 2019-20 programme is “pretty much all sold” but a few suites remain for departures to Antarctica, a transatlantic sailing and coastal voyages along the US East Coast.

“This is good news for agents because if they have customers interested in being one of the first to sail on Eclipse there is still an opportunity,” Grimley said.

“If you have customers who like the idea of ocean cruising but do not want to sail with 1,000 people, this is something you can offer. It is unique and the price reflects the luxury onboard experience.”

Grimley said agents had made some “big bookings” on Eclipse and “embraced” the ship, which has two Airbus H130 helicopters and a six‑passenger submarine.

An “interactive” online agent training module and sales toolkit is expected to be available via the line’s agent academy from August 26.

Fam trips for UK agents on Eclipse are likely between April and June next summer, when the vessel operates in the Mediterranean. 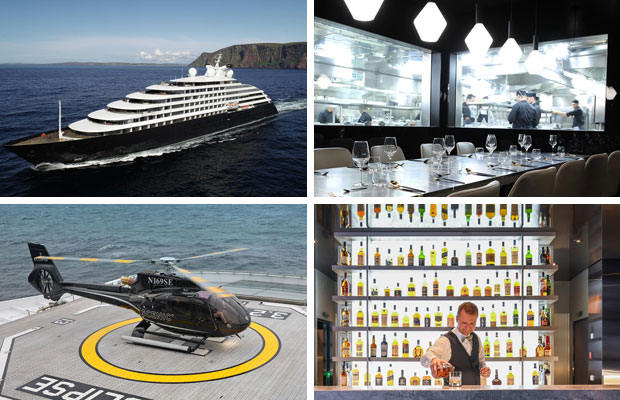 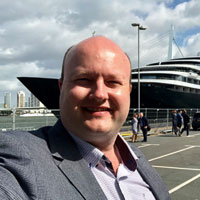 From my first glimpse of Eclipse, I got a sense that this expedition ship was going to be a bit special. Often expedition ships are not pretty, as they’re built for practicality. However, Scenic Eclipse would look as at home in Monte Carlo as it would in Antarctica.

Step aboard and you’d be forgiven for thinking you’d walked into a sleek, boutique London hotel, with dark woods, stylish furniture and light grey carpets.

The ship’s features are vast, including a spa, yoga studio, cooking classroom and an amazing presentation lounge with screens on three walls and reclining chairs. When it comes to exploring, there are 17 expedition staff, 12 Zodiacs, kayaks and you can’t ignore the two helicopters and submarine. It feels slightly like the stuff of James Bond!

The ship has certainly set a new benchmark of luxury in the expedition sector.

Government ‘owes it to travel’ to support the sector

Agent Diary: ‘We live on such a beautiful island, so let’s explore it’

Domestic delay ‘no reason for lack of clarity on overseas travel’