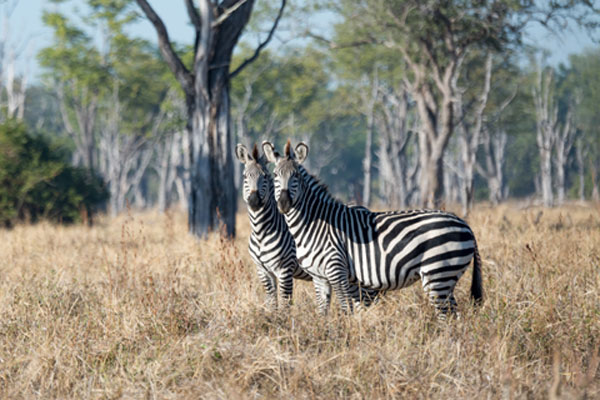 The zebras stand motionless with ears erect, piercing alarm calls come from the birds perched high up in the surrounding mopane trees, and the impalas’ eyes are focused on a thicket no more than 50 metres away.

“I think it’s a lion,” says Jonathan, our guide. A surge of adrenaline races around my body, and my heart drums a quickening rhythm. It’s still early, the peachy glow of sunrise has made way for a soft yellow warmth, and we’re standing on the sun-baked earth in the Zambian bush, a mile or so from the safety of our safari jeep.

Sure enough, a lion emerges from the thicket and calmly walks into the open, looking directly at us scrawny humans. He’s swiftly followed by another, as we stare back in awe.

Stepping into the bush without the protection of a great hunk of metal might sound like a risky way to see wildlife, but South Luangwa is famous and celebrated as the birthplace of the walking safari.

It was pioneered by conservationist Norman Carr and it’s the perfect way to see and appreciate the safari park’s smaller creatures, and understand symbiosis in the ecosystem.

Carr was also an advocate for local empowerment through employment in tourism, and it’s South Luangwa’s long history of community engagement in the life of the national park that has led to its official recognition by the UNWTO, in 2017, as the world’s first truly sustainable national park.

It shows how the dialogue between travel businesses and local communities can shape both the tourism offering, and the lives and livelihoods of those who are directly impacted by it.

The park is teeming with wildlife and the mighty Luangwa River provides a watering ground for hippos and a healthy population of elephants. But it wasn’t always the case.

Back in the late 1980s, elephant numbers in South Luangwa had dwindled to around 200, the black rhino had been pronounced locally extinct and many of the villagers had been displaced from homesteads within the park’s boundaries to game management areas just outside.

Their traditional lifestyles – which included hunting wild animals for food and cutting trees for firewood and house building – were at odds with conserving the natural environment. A handful of lodges in the park, including Flatdogs, Robin Pope Safaris and Time + Tide, realised they could do something about this and created the Luangwa Community and Conservation Fund (LCCF).

Money is generated by adding $10 to $15 to the price of every night’s stay at a lodge and is used to fund projects including Conservation South Luangwa and Project Luangwa, a community initiative. These projects, in turn, help create viable long-term job opportunities as well educate the community on the importance of conserving the natural ecosystems.

Most of the lodges are independent and owner-managed, and the majority of employees are from the local area. Mabel Mwanza, a trainee safari guide at Flatdogs Camp, was inspired by school conservation clubs and hopes to become the region’s first female safari guide. She says: “Working in tourism is incentivising us to plant trees, keep them growing and to keep nature safe.”

Fellow guide Yotam Sakala grew up in neighbouring Mfuwe and started off at Flatdogs as a waiter. He then rose to become the restaurant manager before embarking on his training as a guide. His enthusiasm and passion for wildlife is infectious and he tells me that his favourite trips with guests are the walking safaris.

The sense of community extends beyond the park grounds, with local enterprises such as Mulberry Mongoose, a jewellery and accessories workshop set just outside the park’s border. The craftswomen use snare wire uncovered during anti-poaching raids, hammer it flat or twist it into coils, then couple it with semi-precious stones and freshwater pearls to create unique pieces. The wire is made of a tough steel-zinc alloy and you can even have a go at hammering it yourself.

The brand’s tagline is ‘beauty from brutality’. And like the rest of this wild, untouched region, there is certainly no skimping on the beauty. 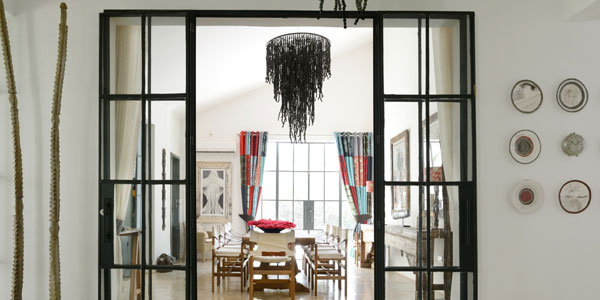 Lusaka’s Latitude 15° property is a 30-minute taxi ride from the airport and an ideal overnight option before or after a safari. Conceived as a new breed of African city hotel, the Latitude group is committed to creating a highend experience with top-level sustainability principles.

Energy comes from solar and hydro, while all the grey water is recycled on-site. Drinking water comes from two nearby boreholes and is filtered before use. The entire place is filled with handpicked contemporary African art and artisan interior furnishings created with recycled materials, from beach glass to bits of old Land Rovers. There are also conference facilities, a spa and a co-working space.