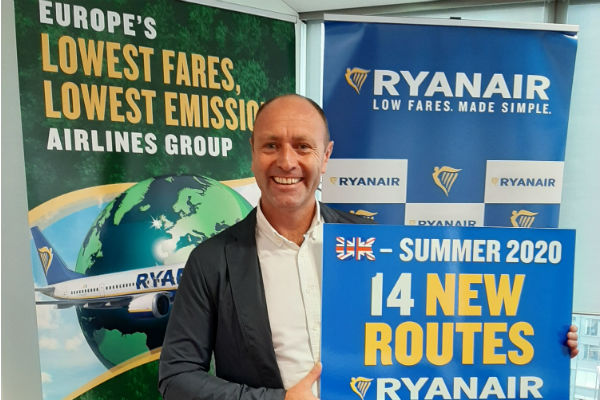 Ryanair will begin flying to destinations including Cluj in Romania and Terceira in Portugal as part of its summer 2020 schedule.

The additions bring Ryanair’s total number of routes from the UK to more than 500 with bookings available until October 2020.

The five new routes will operate from Edinburgh to Bydgoszcz in Poland, and Manchester to Pisa, both twice a week. Stansted to Cluj and Kosice will both be served three times a week, and a weekly service will run from Stansted to Terceira.

Ryanair will also add a four flights week service from Luton to Krakow, a three a week to Seville, and services from Manchester to Katowice three times a week, Milan Malpensa five times a week and Prague nine times a week.

The carrier is offering fares starting at £14.99, for travel until the end of November, which must be booked by midnight tomorrow (Thursday).

Ryanair chief marketing officer Kenny Jacobs said: “Ryanair is delighted to bring the lowest emissions and fares to the UK with our summer 2020 schedule, with 14 new routes at our UK airports, and more than 500 routes in total, which will deliver 46.3 million customers per annum and support 35,000 jobs at our 21 UK airports.”