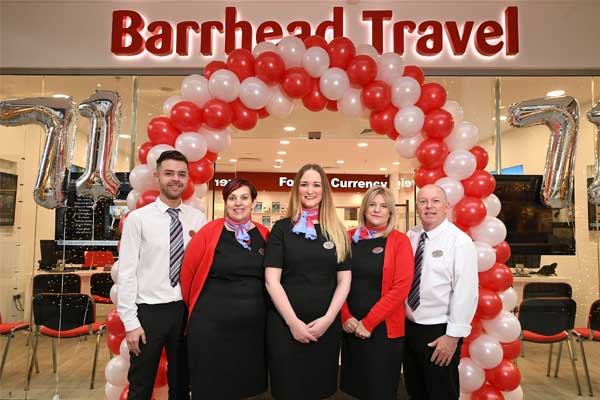 Former Thomas Cook bosses recruited by Barrhead Travel are close to signing leases on up to 10 stores.

Founder and chairman of Barrhead parent Travel Leaders Group Mike Batt said the trio had been employed on a full-time basis to focus solely on expansion plans.

They will spend time at Barrhead’s head office in Scotland but mainly work from home.

More: Barrhead Travel reaffirms plans to expand retail network by ‘up to 100 shops’

“Chris and the team are already working with the property agents and talking to lots of different landlords and there are a lot of properties to let,” Batt told Travel Weekly.

“We are close to signing a single digit number of stores and we have staff under training.”

Last week Travel Leaders announced it was targeting 100 new stores after it was announced Hays Travel had acquired the leases for the entire Thomas Cook retail estate.

This week Batt said there was no reason why Barrhead could not exceed 100 shops in future if conditions allowed.

“If it was working well we would have no reason to stop,” he said.

“We have a great brand in Barrhead and we’d like to get bigger.”

Batt said Chris and his team’s job was to “put together the jigsaw puzzle” of finding shops available and the shops Hays don’t want.

“It’s impossible to know exactly how far this will go, but our goal would be to open as many as we can because this is such a unique circumstance. There are 555 Cook stores already under contract to Hays and I really admire what they have done – it’s a positive move and I support that.

“I don’t know what their eventual strategy will be and whether there will be duplication, but we do know there are a lot of empty stores in British high streets so we will take advantage of Cook’s management team and their staff.”

He said he would not look to recruit any Cook staff that had already joined Hays. “We wish them luck,” Batt added.

Barrhead has so far recruited 30 former Cook staff and is training a further 20.

“We want to make sure they know Barrhead is open for business and we’re very happy to receive applications,” Batt said.

Travel Leaders was among several agencies to bid for Thomas Cook stores before the deal was struck with Hays. Commenting on the bidding process with the liquidators, Batt said: “Hays bid on it and it was a better bid than ours.”

Asked about the group’s expansion strategy, Batt said they would not be targeting growth by regions, instead it would look at high streets individually and the availability of staff.

Barrhead currently operates a network of 76 own-brand and managed services shops, largely based in Scotland as well as locations in in Newcastle, Cumbria, Leicester, Southampton and Belfast.

Batt said technology and social media had removed barriers when it came to getting your brand known in physical areas.

“We have to look at a mix of factors. Every (store) will be based on individual decisions based on availability, staff and the right premises and landlord.”

Asked if he would look to open stores where Hays is based, Batt said: “It might put us off but maybe not. We can’t say definitively.”

“We have a track record of people development and they align with our values,” she said.

“They have extensive knowledge of the industry and are very well respected by suppliers and employees. I’m really looking forward to working with them.”