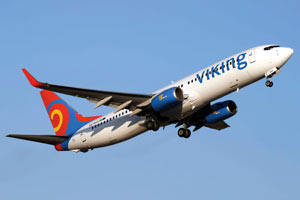 Viking Airlines AB has returned its three aircraft to the leasing company for the winter period but hopes to resume operations next year. A spokesman for the airline confirmed it would return next summer with a smaller programme.

The airline had already announced the downsizing of its fleet by three aircraft and a number of job losses in August following the collapse of Kiss Flights.

It was operating one aircraft from the UK and would have had a small winter programme, so the change is expected to have little impact on agents and tour operators.

Noel Josephides, managing director of Sunvil Holidays and former non-executive chairman of the airline, said: “The airline hasn’t ceased trading or anything like that. It will resume flying next summer.”

Viking Hellas launched a three-times-a-week scheduled service from Manchester to Athens in February with onward connections to three Iraqi cities.

Viking AB, which was formed in 2003 and is owned by European Aviation & Technical Services and Black Pearl Investments, recorded a net profit of €3.8 million for the 2009 financial year with an equity ratio of 40%.