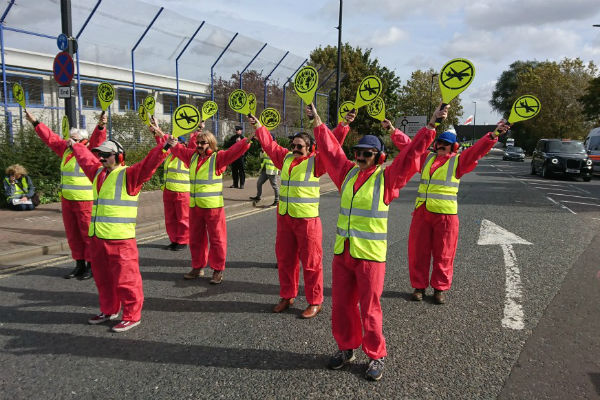 Environmental protesters blocked a road near Heathrow yesterday to highlight opposition to a planned third runway.

The pre-general election blockade by Extinction Rebellion involved cyclists and a ‘bulldozer’.

About 300 activists lay in front of a pink tractor with a bulldozer-style shovel on the front in symbolic opposition to expansion of the airport.

No flights were affected but passengers faced disruption getting to and from Heathrow.

Extinction Rebellion is calling on Boris Johnson to cancel the third runway immediately if he re-takes office this week.

Johnson, who is standing for election in nearby Uxbridge and South Ruislip, said four years ago he would lie in front of bulldozers to prevent the third runway.

The Conservative election manifesto says Heathrow must demonstrate it can meet air quality and noise obligations and that the business case for expansion “is realistic”.

Local anti-Heathrow campaigner Christine Taylor said: “Residents in villages to the north of Heathrow have repeatedly faced the destruction of their communities by a proposed third runway.

“Now, with communities around the world suffering the effects of climate change, it’s time to scrap the runway and cancel the bulldozers once and for all.”

Climate change activists threaten to shut down Heathrow with drones