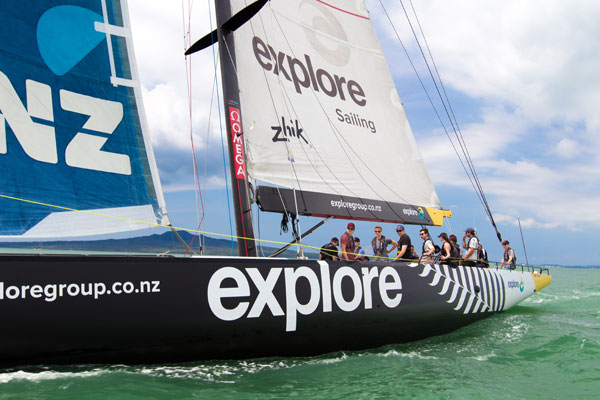 Sailing across Auckland’s harbour on a real America’s Cup yacht is a thrill-packed way to take in the sights, finds David Whitley.

From a distance, NZL 68 is gliding across Waitemata Harbour with effortless grace. Zoom in, however, and the crew is frantically grinding, with four teams of eight assembled around what look like hand-powered bikes. Their aim is to generate enough power to shift the sail and catch the wind, but this is a rank amateur effort.

The crew for the day on NZL 68 are not the pros, but rather have-a-go heroes who have signed up for a yachting experience. The vessel could be forgiven for thinking it deserves better. It was built to challenge for the America’s Cup, and was used as a training vessel for the world’s premier yachting event in 2003.

“From a distance, NZL 68 is gliding across Waitemata Harbour with effortless grace. Zoom in, however, and the crew is frantically grinding.”

Now, the professionals in the crew are more teacher than racer. But their students are eager, even if that means their arm muscles get a thorough workout and any bad backs are put to the test. But it doesn’t take long for people to get into it, powering away with relish. 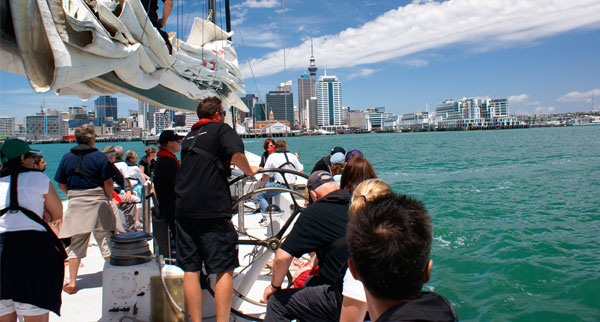 The yacht is a sleek beast, 80ft long and with a 113ft mast, but it’s made for speed and manoeuvrability. While it would be in trouble on the deep ocean, it’s in its element amid light winds near the shore. It picks up a fair speed at nine to 12 knots – around 14 miles per hour – and as fast as the city’s ferries go with motor power.

To attain speed, comfort is sacrificed. The closest thing there is to seating is parking yourself along the edge of the boat, hoping not to get a drenching from a rogue wave. The deck lurches too. At times it feels like it’s almost vertical, as the yacht tries to cut the most aerodynamic path. It’s not quite holding on for dear life, but it’s certainly not relaxed idling either.

“The closest thing there is to seating is parking yourself along the edge of the boat, hoping not to get a drenching from a rogue wave.”

After 10 minutes or so, however, it becomes the new normal. Commands are barked (“grind forwards!”) and motivation is bellowed (“a flappy sail is an unhappy sail!”) as the novice crew gets used to life on the ocean wave.

Then come the moments when the hard work pays off. The yacht picks up speed, the wind smooth behind the sail, and Auckland’s good looks can be taken in. The Sky Tower reaches to the heavens to one side, the lava stones stack up on a volcanic island to the other. Speed, for once, is not of the essence – the experience is.

The two-hour America’s Cup Sailing Experience is run by local sailing specialist the Explore Group, departing twice daily from the harbour. It can be booked through Do Something Different from £95 for adults or £67 for children aged between 10 and 15.
exploregroup.co.nz
dosomethingdifferent.com

The best things to do in Auckland, the City of Sails
See the sights of New Zealand by land, air and sea
The best small cities to visit in Australasia