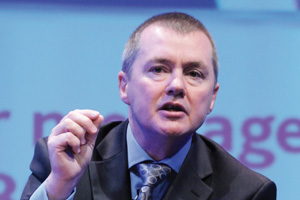 British Airways will still fly from Heathrow in 2050 after parent International Airlines Group (IAG) bought BMI to ensure it could expand at the airport, Willie Walsh told an audience in London last night.

Speaking at an Evening Standard debate on London airports, Walsh dismissed a new hub airport in the Thames estuary as “a distraction”, said he supports high-speed rail and would not campaign for a third runway at Heathrow.

The IAG chief executive said: “I was disappointed with the Conservative decision to oppose the third runway, but I accept the decision. However, there is no plan B.

“A third runway should have been built, but it won’t so I can’t waste time. We bought BMI to give us the opportunity to fly to some of the routes [we had not been able to].”

Walsh told the audience of several hundred: “I don’t believe Boris Island will be built. You can have an airport where you like; if you don’t have airlines there, it won’t happen. In 2050, BA will be flying from Heathrow.”

He said: “I hear more argument in favour of a third runway since I said I was not going to campaign for it. So I’m going to carry on saying that and we might see it built.”

Writer Alain de Botton argued against expanding Heathrow and described a new Thames estuary airport as “pie in the sky”.

He told the audience: “Our inefficiency in building airports is a symptom of efficiency in other areas, such as democracy. That is more important than business.

“We should celebrate the 15 years it took to build [Heathrow’s] Terminal 5. It is a tribute to our freedom.” De Boton added: “We have five airports in London. Let’s use them.”

Environmentalist Tamsin Omond said the problem was “miss-use of airport capacity”, saying: “45% of capacity is wasted on journeys of less than 300 miles, on flights from Heathrow to Edinburgh and Manchester.

London is the best-connected city in the world. The government is right to stay firm on its decision [on Heathrow].”

Daniel Moylan, aviation advisor to London mayor Boris Johnson who advocates a new Thames estuary hub, argued: “The question is not whether we have a fourth or fifth runway somewhere in the southeast. The question is whether it is going to be in Britain.

“The hub capacity used by a large number of people outside the southeast has already moved to Schiphol.”

However, Moylan conceded that half the funding for a new airport, provisionally costing £50 billion, would have to come from “the public purse”.