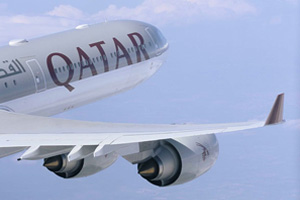 Qatar Airways will launch daily Boeing 787 services from Heathrow to Doha in September, becoming the first carrier to operate the new aircraft from the UK.

The carrier’s chief executive Akbar Al Baker confirmed he is aiming for a September start date and told Travel Weekly he would announce the launch from Heathrow “once we have a firm date of delivery”.

The first of 30 Qatar Airways 787s was on display at Farnborough Air Show last week. But the Dreamliner has returned to the US to have Qatar’s in-flight entertainment system installed.

Qatar hopes to take delivery of the aircraft by early September, allowing it to begin services from Heathrow towards the end of the month.

The airline operates five services a day from Heathrow to its Doha hub. It is likely to operate the 787 on the 06:30 departure from Doha into Heathrow and return to Qatar in the afternoon, offering connections with services to the Far East and Australia.

The carrier has resisted declaring its 787 service from Heathrow will be the first from the UK, but there appears only one outside contender to beat it.

Air India has the aircraft on order and could in theory take delivery in time to pip Qatar at the post.

Japanese carriers All Nippon Airways and JAL already have the 787 in service, but are understood to be uninterested in flying it from Heathrow.

Asked what excites him about the 787, Al Baker said: “The operating economies of the aircraft and the passenger luxury.”