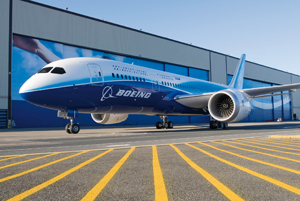 Construction has started on British Airways’ first Boeing 787 Dreamliner which is due to join the fleet next May.

The airline has orders for 24 of the new generation aircraft, as well as 12 Airbus A380 superjumbos.

The new aircraft types will bring “significant opportunities” to grow the BA route network, with new destinations for both the 787 and the A380 to be announced next year.

The carrier is on track to be first in Europe to have both aircraft types operating in its fleet next year.

BA completed the latest phase of a multi-million pound redevelopment of its Heathrow engineering base last year to prepare for the arrival of the new fleet of 787s, 777-300ERs and A380s.

“It marks a new era in British Airways as we take delivery of a new generation of stylish and fuel-efficient aircraft, bringing even better service to our customers.

“These revolutionary aircraft form part of a £5 billion investment by British Airways in new aircraft, smarter cabins, elegant lounges, and new technologies to make life more comfortable in the air – and on the ground.”