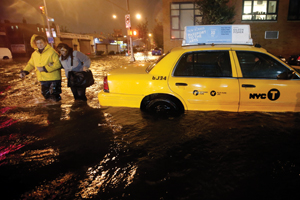 Parts of Manhattan are underwater this morning as Hurricane Sandy – now downgraded to a post-tropical storm – hit the US east coast bringing widespread travel disruption.

Almost 14,000 flights were cancelled yesterday and at least 5,000 have been affected today.

The number of cancellations is expected to grow depending on the outcome of the storm, possibly becoming as high as yesterday’s number, flight tracking service Flightaware.com warned.

Public transport was suspended in Washington DC, New York, Baltimore, Philadelphia and Boston while Amtrak suspended passenger train services across the north-east of the country.

It will take up to four days to get flood water out of seven NY subway tunnels, in the most devastating night in the service’s 108-year history, according to the Metro Transit Authority.

MTA chairman Joseph Lhota said: “The New York City subway system is 108 years old, but it has never faced a disaster as devastating as what we experienced last night.

“Hurricane Sandy wreaked havoc on our entire transportation system, in every borough and county of the region. It has brought down trees, ripped out power and inundated tunnels, rail yards and bus depots.”

The storm made landfall in New Jersey with winds of up to 85mph and caused a record surge of seawater in New York City, flooding car and subway tunnels and leaving much of lower Manhattan without power.

An estimated 50 million people across the US east coast could be affected, with up to one million ordered to evacuate homes. The ‘super storm’ has been blamed for at least 10 deaths across several states.

At least five million people are without electricity but the full extent of the damage caused by Sandy may not be known until daybreak, the BBC reported.

The British Embassy in Washington and the British Consulates-General in New York and Boston were all forced to shut today (Tuesday).

The FCO said: “Hurricane Sandy is affecting a large area along the east coast of the US with strong winds, heavy rain, flooding and dangerous sea conditions. Widespread power outages and severe travels delays are likely.

“There will be severe disruption to air, rail, and cruise line services for the next few days. You should expect delays and contact your travel provider or tour representative for updates on your planned journey.”

Britons were urged to monitor radio and television reports for the latest information and follow the advice of local authorities, including if ordered to evacuate.

The three New York area airports, Philadelphia, Washington and Boston are all affected.

A Heathrow spokesman said: “We advise passengers due to fly to the area in the next couple of days to check the status of their flight with their airline before travelling to the airport.”

Flights at other US East Coast airports would likely restart by mid-morning today, the carrier said.

British Airways has cancelled 11 return flights to and from the east coast of the US today.

The cancellations include some flights to New York JFK, Newark, Washington, Baltimore and Philadelphia. All flights to and from Boston are planned to operate as normal.

“We are doing all we can to help customers whose flights have been cancelled and will look to use larger aircraft on some routes when the full flying schedule resumes to help get customers to their correct destination as quickly as we can,” the airline said.