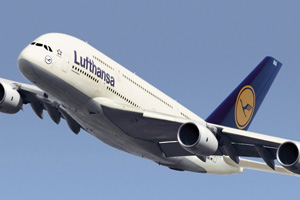 Lufthansa has resolved a pay dispute with flight attendants after months of difficult negotiations.

The German carrier went to arbitration in an effort to find a solution to the row and head off further strike action in the run up to the busy Christmas period.

The deal with the UFO union includes a pay rise of €100 and a one-off payment to all cabin crew of €320.

Lufthansa board member Peter Gerber said: “After months of difficult negotiations, we have now reached an agreement which takes into account the positions of both sides.

“For us, the sustainable ongoing development of the pay system with remuneration scales for new staff was essential in the competitive cost environment in which we operate.

“Additionally, we have made sweeping concessions in terms of flexibility and productivity.

“In return, Lufthansa has accepted rises in salary and has made concessions in safeguarding jobs.

“All in all, we have come to an acceptable settlement, which makes demands on both sides, while taking due account of the interests of the employer and employees.”