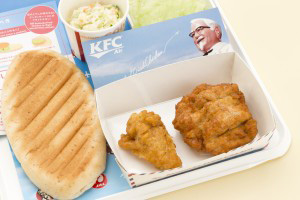 The meals will be available in Premium Economy and Economy class on JAL flights from Tokyo Narita airport to New York, Boston, Chicago, Los Angeles, San Diego, London, Paris and Frankfurt until the end of February 2013.

Fast-food fans will be offered KFC’s Original Recipe two-piece chicken meal, which has been exclusively packaged for the airline and includes one drumstick, one boneless chicken breast fillet, flat bread, coleslaw and lettuce.

A Christmas visit to KFC – famed for its mascot, Colonel Sanders, and its secret recipe of “11 herbs and spices” – has bizarrely become something of a tradition in Japan, thanks to some canny marketing that has associated the outlet with the festive period.