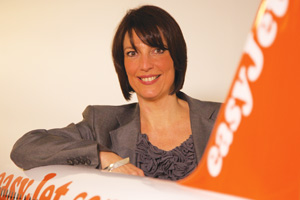 Easyjet chief executive Carolyn McCall has seen her pay soar by more than a quarter, from £1.55 million to almost £1.99 million, including a £1.27 million bonus.

The budget airline’s annual report shows that she hit targets to be paid 95.8% of her maximum bonus, and chose to defer half into shares.

McCall has seen the carrier’s profits double since she joined from Guardian Media Group in 2010.

Pre-tax profits rose 28% this year to £317 million and the company’s share price has risen 88% over the past year.

An airline spokesman told the Daily Telegraph: “EasyJet’s remuneration strategy is to pay a basic salary with other compensation heavily weighted towards rewarding success. By any measure 2012 was a successful year.”

The airline saw its passenger load factor increase to 89.6% against 88.3% a year earlier.

Carryings for the 12 months ending in November were up by 7.3% to more than 59 million with an improved load factor of 88.7%.